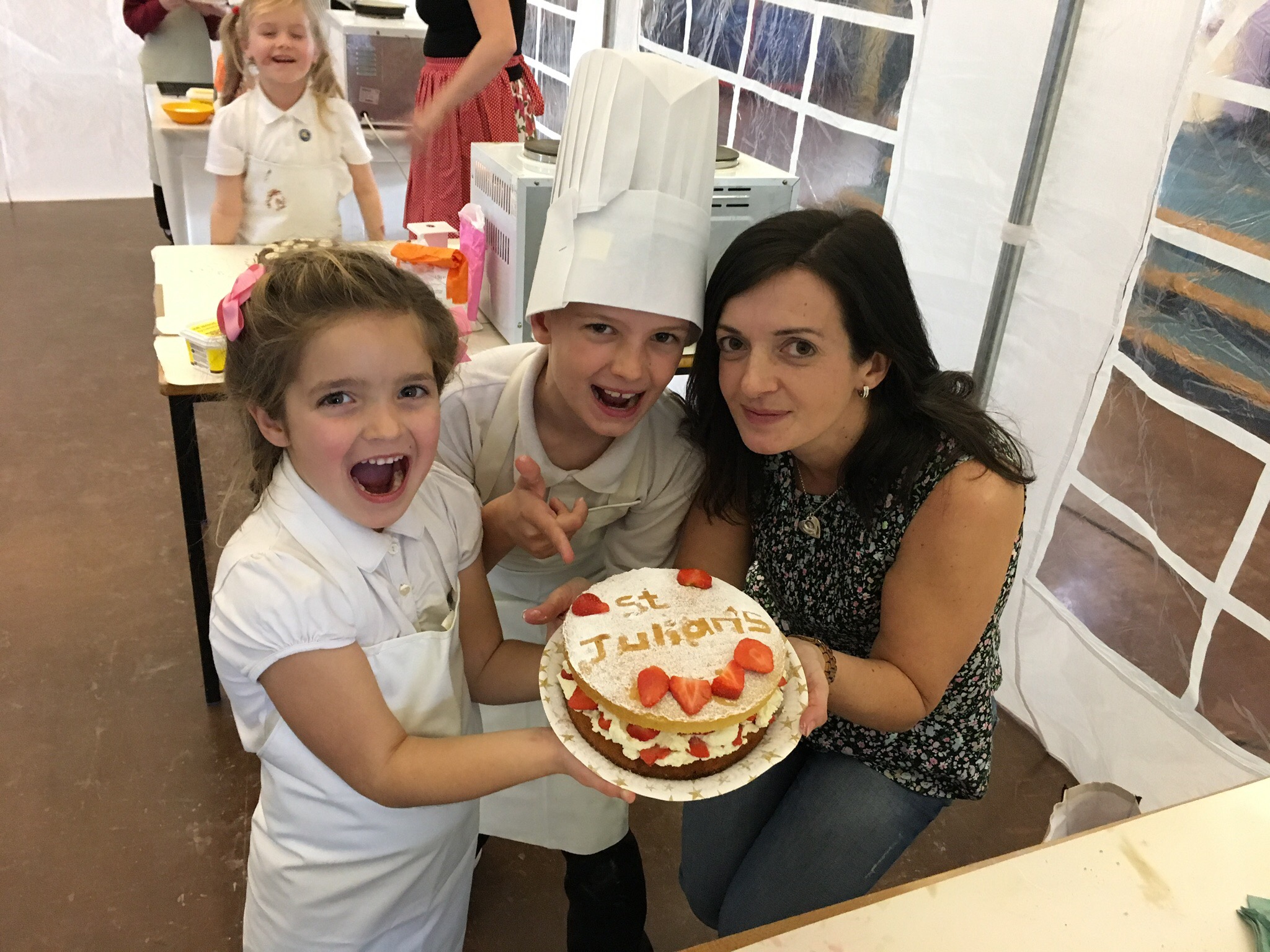 Well, what a great couple of days! Yesterday and today, we held our ‘Great St. Julian’s Bake Off’ event where we invite teams of pupils and their parents to compete in our annual baking tournament, based on the popular TV series. The two days were split into morning and afternoon sessions over two days with 44 pupils and 24 parents taking part.

Parents and pupils had to complete an online application form in order to take part, describing their perfect cake and worst cooking disaster. We received so many applications this year that we decided to run the event over two days, rather than just one as in previous years.

Teams were provided with the ingredients and a recipe to make a basic sponge cake, but had the option of bringing their own extra ingredients if they wished.

Parents were told that pupils had to do most of the work, which proved entertaining to say the least…particularly when cracking eggs and sifting flour! Needless to say, there was a lot of mess to clean up after each session and piles of washing up!

When the cakes were baked, we brought in the judges to sample them and decide on a winning team. Mrs Arnold, Mrs Orford and Mr Mansfield took it in turns to taste the scrumptious creations.

We were so impressed with the cakes that were made! There were so many creative and artistic ideas for decorations. One team recreated the St. Julian’s logo with icing hand prints, another team wrote ‘St. Julian’s’ on the top of their cake with icing sugar, another team made a Simpson’s chocolate doughnut style cake with a hole in the middle, another team decorated their cake with a giant Poppy for remembrance day and there were also lots of Christmas-themed cakes. Teams used a range of fillings and flavours, from butter-cream, to chocolate, to vanilla, to jam; they were all so tasty.

After the judges announced the winner and handed over the golden glittery spoon trophy, the teams got to try each others’ cakes.

We hold this event each year for several reasons. The main reason is because we firmly believe that family is important! We also feel that the best education happens when pupils, parents and schools are all working closely together and hosting events such as this one provide opportunities for parents to come in and take part in learning. The other reason we hold the Bake Off event is because baking involves a combination of so many different maths and literacy skills. Pupils have to read recipes and follow instructions. They’re constantly having to talk, communicate and explain to the camera what they’re doing, which helps build confidence. They have to weigh the ingredients, calculate ratios, time how long the cake stays in the oven. Applying those mathematical skills in a real life context helps to consolidate  and develop their understanding of these concepts.

We are so grateful to all parents who took part, many of whom had to take a morning/afternoon off work. We thoroughly enjoyed working with you and your children and hope that you and they will remember this experience for many years to come.

I’m also incredibly grateful to Mrs Thomas, Mrs Dennis and Mrs Addis who put so much effort into the organisation of the event…and tackled the mountains of washing up after each session!