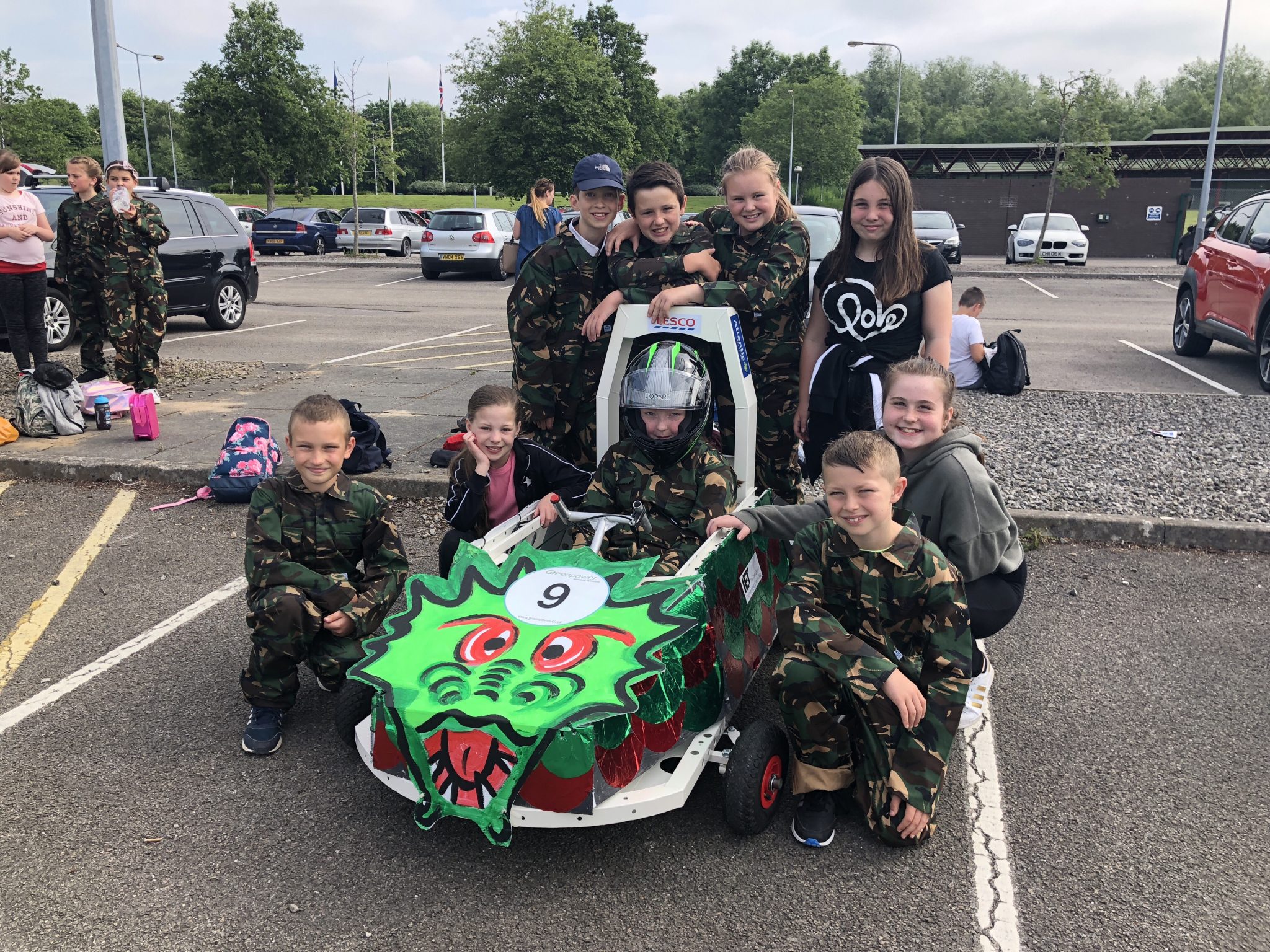 What a day! The year 6 pupils arrived at school at 7:45am to hop on a coach to the Renishaw headquarters in Miskin, ready for the Greenpower Formula Goblin Race Day!

For the past few months, they have been building electric powered cars using the Greenpower Formula Goblin Car kits. Each Y6 class had their own kit and our young engineers have been working with volunteers from the Intellectual Property Office in an after-school STEM (science, technology, engineering and maths) club, ran by Mrs Hollings, to assemble and test the cars.

In the past week, pupils have been completing time-trials on the playground to find the best drivers who will take the wheel in the event today.

We’re incredibly lucky (and grateful!) to have received support from Tesco and Atlantic Recycling, who sponsored our cars. Tesco provided a gigantic lorry to transport them to the event, making sure we arrived in style. Atlantic Recycling bought our boiler suits, helmets, gloves and other safety equipment and also paid the race day entry fee for each of our cars.

As we arrived at Renishaw, Miskin, heads stopped and turned to look at our large coach and 8 metre lorry! Ian, the lorry driver, unloaded the cars and before long, they were lined up with their teams for inspection. Scrutineers came around to examine each of the cars to ensure they had been put together correctly and that they were road worthy. The children were asked about their bodywork designs and had to present a portfolio showing them building their vehicles.

We were fascinated to see the designs which the other schools had come up with for their car bodywork. One had a real leather comfy driver’s seat, one had a fiberglass chassis one even had real working headlamps; the creativity was so impressive!

The whistle went and the cars were summoned to the first event: The Slalom. Each car had to zig-zag through a series of cones which had been set out, whilst being timed. If any of the cones were hit, there were time penalties. Our racers got off to a great start with Harley flying through without touching any cones at all! Some of our other drivers, however, seemed to think the aim of the game was to hit every cone on their way through! We completed the slalom several times and they recorded our three best times.

After, it was time for the drag race. Three cars would line up at the start of the track and then the flag would wave, signalling the drivers to put full power on the throttle all the way to the end of the track. Each car was allowed one ‘pusher’, who would give their vehicle a big push to get it off to a flying start! Again, if cones were hit, a time penalty was added. The children enjoyed the buzz of racing the other schools.

Next up was the knock out lap race, meaning that only the winner of each race would go through to the next round until the final. Our supporters we’re cheering loudly and everyone was in good spirits. As we had three cars, we were hoping that at least one of our drivers would make it into the final, but we were overjoyed when not one but two of our cars made it into the final.

The flag was waved for the start of the Grand final race, two of our cars against another school’s car, which they had named ‘Gary’. All three cars got off to an incredibly speedy start, zooming up the first straight. On the first corner, Aron in our sneaky shark car squeezed through a small gap and got into the lead. Morgan and the other car were right behind him battling for second position and it was incredibly tense! The crowds were cheering, wondering who was going to win! All of a sudden, ‘Gary’ clipped one of the tyres on Morgan’s car and ended up in the cones. The red flag was held up to signal an immediate stop in the race, whilst they repositioned the cars back on the track. They then had the signal to go again, Aron still in the lead, with Morgan battling it out with the other car. There were a total of six laps to complete, but it wasn’t long before the other car tried to slip through a small gap to push past Morgan, but he wasn’t having any of it and was determined not to be defeated! He held his position, forcing the other car into the cones yet again. This time, there was enough time for Aron in his shark car and Morgan to lap the other car whilst it was being rescued from the cones and another the driver did a superb job to try to close the gap, it was too late. The sneaky shark had done it and won the race, with Morgan taking second place.

We were delighted to receive our trophies at the end of the day, before getting back on the coach to Newport.

We’re extremely grateful to Greenpower, Renishaw, Tesco, Atlantic Recycling and all of the pupils and teachers who took part! It was a brilliant day!