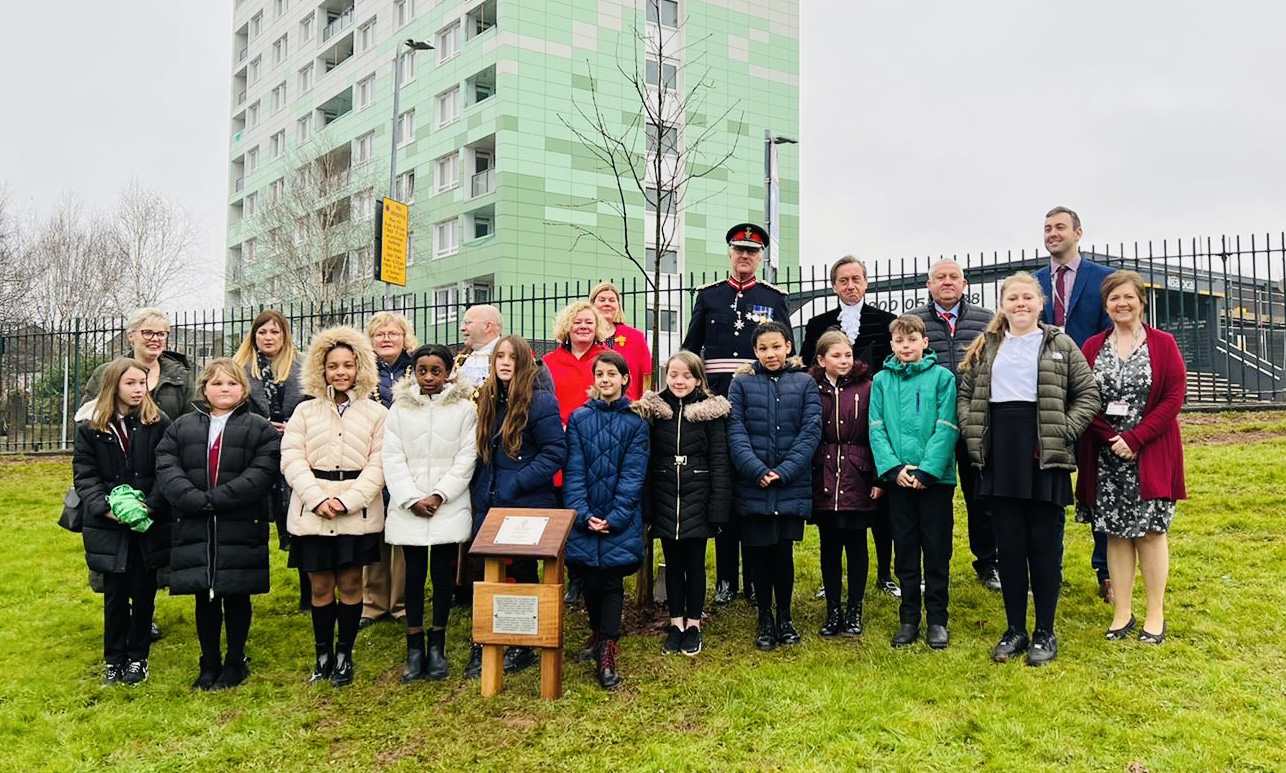 On March 2nd, we had some special visitors to the school to celebrate two special occasions with us – the queen’s Platinum Jubilee and also 70 years of St. Julian’s Primary School. Our school was built in 1952, which is the same year that Queen Elizabeth II became queen.

As part of her celebrations, the Queen has launched a project called ‘The Queen’s Green Canopy’, which is a unique tree planting initiative created to mark Her Majesty’s Platinum Jubilee in 2022 which invites people from across the United Kingdom to “Plant a Tree for the Jubilee”.

Our school is one of five Newport schools which were built in 1952 (St Julian’s, Gaer, Maesglas, Malpas Park and Alway Primary). Because of this, a special ceremony was held by Newport Council at each of those schools to officially plant the tree and unveil a platinum jubilee plaque.

Prior to the event, children in the school had worked with Ragsy (a singer from the TV show ‘The Voice’) and the Gwent Music Service to write a special song about the tree and the queen. Children also worked with vocal coach Joy Dando to learn the English and Welsh National Anthems.

The event started with the song that the children had written with Ragsy – to the tune of Jessie-J’s ‘Price Tag’. You can listed to part of it in the video below. The choir member sang the song in the school hall, but the rest of the school joined and sang virtually from their classrooms and were projected onto the screen behind the choir.

Then Jane Mudd, Leader of the Council, gave a speech. After, the Lord Lieutenant planted the tree and unveiled the plaque.

Then Reception and Year 1 pupils performed a song about an Amelanchier Tree – the type of tree planted on our site.

Next, the whole school sang ‘God Save the Queen’. Then Mr Mansfield gave a speech and we presented our visitors with a special St. Julian’s Primary Mug to celebrate the occasion. Then Harrison, a pupil in year 2, performed ‘Maggon the Dragon’ on the piano. Then we sang the Welsh National Anthem. To end the ceremony, the Lord Lieutenant presented a certificate to our Eisteddfod Bard.

The visitors were really impressed with our singing and we really enjoyed performing to a live audience again – it’s been so long!

Thank you to everyone who made the event a success.