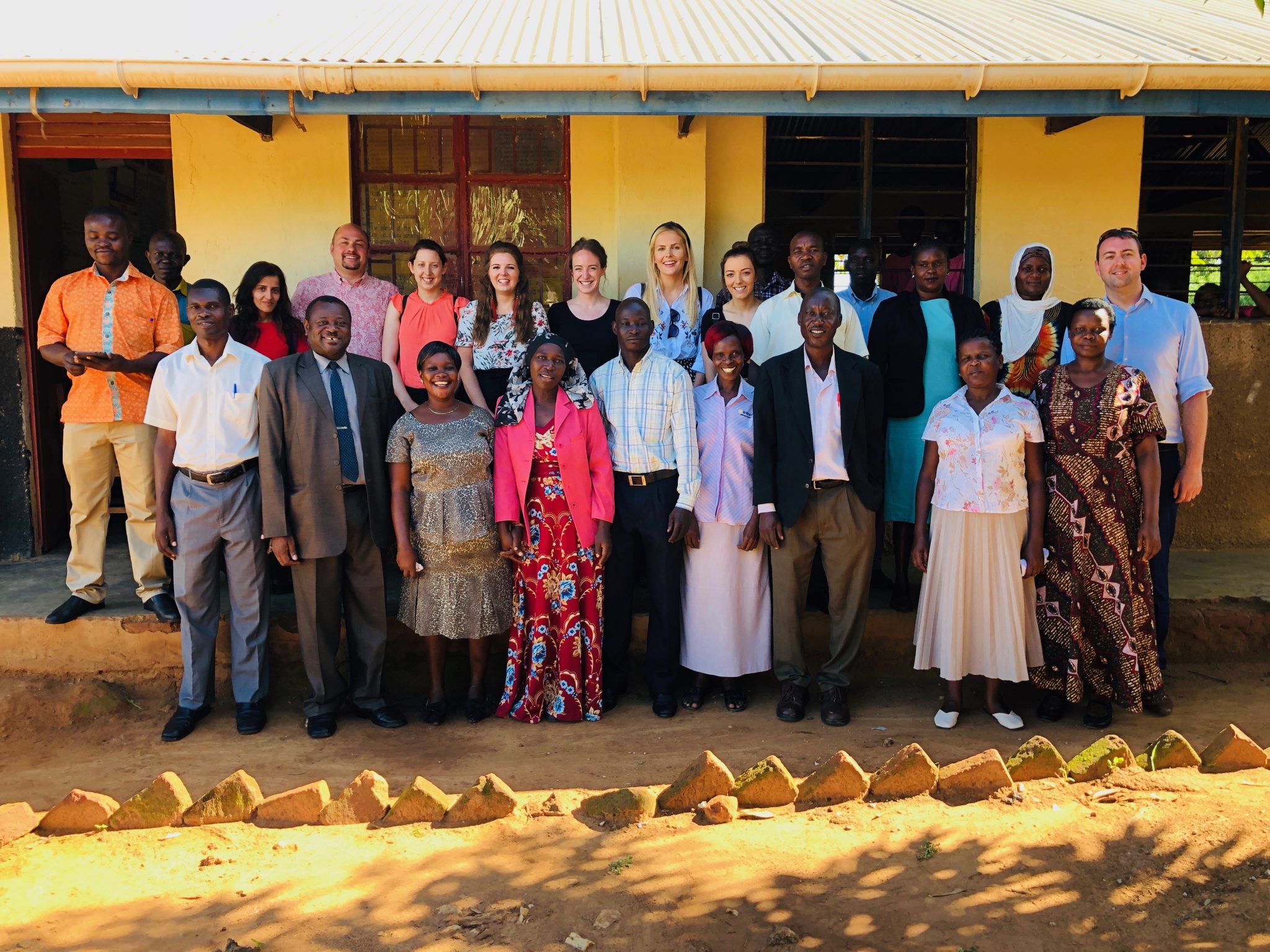 Our day started bright and early again on Monday, ready to visit all of the schools we are linked with. At breakfast, Mr Mansfield was slathering on the Factor 50 suncream and borrowing a malaria tablet from Mrs Lewis, for the 3rd day in a row. Miss Butcher was over the moon with today’s breakfast – pancakes. We got as far as the main road when Mr Mansfield realised he’d forgotten at least 3 items he needed for today’s visits so we had to turn back. We let him off because he’s done such an excellent job of organising this trip.

A quick stop in Mbale town to pick up some goalposts and textbooks that were ordered, and onwards to Namunsi Primary to say hello. They are twinned with Mount Pleasant Primary school, and although Mr Prewett was very sad not to be able to travel to Uganda this year, we made sure to send the children and staff his best wishes and took lots of photos and videos to show him. They performed a range of songs for us as we visited each class and Miss Butcher and Mrs Lewis tried to join in with the actions – a very kind teacher wrote down the words for us so we hope to teach the children back in Wales.

The school were delighted to received the gifts of paper, exercise books, pens and pencils which we had purchased with the money raised by pupils and staff at St. Julian’s Primary School.

Mr Walyaula was also overjoyed to receive a laptop which Mr Mansfield had been donated by SPTS, a technology firm in Newport.

The next part of the journey was to Nabisolo Primary school, which was a bumpy ride up a mountain, giving us to the most beautiful view over Mbale and beyond, and even included a waterfall. As we climbed out of the minibus, children poured out of the classrooms with huge excited smiles, handshakes and shy ‘hellos’. Here, we left Miss Chard and Eleanor, the schools coordinator for Pont charity, to spend some time in Rogerstone’s link school.

Next we headed to Mooni Primary, Eveswell Primary’s link school, where we got a similar welcome and left Miss Badat and Miss James to meet the the children and staff.

By now it has started to rain. Not the type of rain we have in Wales and much, much heavier than the downpour at Sipi Falls. This was the most rain imaginable, pouring from the sky, at the exact moment the minibus attempted to climb a hill to the next school. The driver prepared with a little run up and we thought we were almost there until we got slower and slower and finally stopped, mid hill. The team looked at each other, laughing nervously (Miss Butcher whipped out her phone to video the impending disaster) and the driver tried to accelerate. The bus didn’t move. The wheels started to spin furiously, we climbed a metre then slid back down. The driver, who remained perfectly calm, took a look outside then got back in, and had another go. 10 minutes later, Mrs Lewis was about to call Mr Rees to say she couldn’t travel back to St Julian’s because she was stuck in a minibus in a rainstorm on the side of a Ugandan mountain, when we finally made it to the top of the hill, wooping and congratulating our victory.

Namatsale Primary school, Alway’s link school. was our next stop, to drop Mrs Tyler and Mr Rowlands. Here, despite the rain, we could hear the children calling their welcome from the windows of their classrooms.

We finally reached Busiu Primary School, where we received another very warm welcome. As it is the first day back after their school holiday, not all of the children return back at the same time, so we got to spend time with a lovely group of about 30 pupils.

The rain hadn’t reached Busiu yet so we were able to have a performance from a small group of singers. Mrs Napakoli sat the three of us down on chairs outside on the grass and the girls began to sing, first a Ugandan song that had even the staff joining the dance. Then came an English song, that welcomed Mr Mansfield, Mrs Lewis and Miss Butcher by name. We were so honoured by this personalised touch, and by the effort that much have gone into preparing such a performance, it almost bought tears to our eyes.

Because electricity has been installed in the school now, Miss Butcher had the brilliant idea of bringing two electric hotplates out with us. This idea was met with some confusion from the staff, who weren’t sure about what we proposed to do – make pancakes with the children! A pancake making station was set up at the front of a classroom with the children facing forward; Miss Butcher and Mrs Lewis felt like they were on Ready Steady Cook! Some very helpful girls came forward to help mix the ingredients today, while Miss Butcher’s nan’s recipe was copied onto the blackboard for them to use after, and we were ready to cook. Mrs Lewis is not as experienced with a pancake hotplate at Miss Butcher, and her pancakes were a very odd shape, much to the amusement of our helpers round the table, who almost collapsed in a fit of giggles! We made enough pancakes for all the children and staff to have a taste – many weren’t sure but many finished theirs in one bite and had came back for seconds.

Meanwhile, Mr Mansfield was conducting the big unveil of the printer/scanner/copier we bought from Wales, from the gigantic box we lugged around through two airports and on minibuses across Uganda. However, the effort was entirely worth it to see the excitement when the box was opened! Then came the very serious printer lesson from Mr Mansfield; Mrs Lewis poked her head round the office door to offer pancakes but they were too engrossed to notice!

Mrs Lewis then set about continuing the giant St Julian’s Logo on the wall; she felt a huge amount of pressure to get it right, especially with another small audience behind her. However, the peaceful painting session was broken by squeals of delight when Mr Mansfield got the footballs out of the minibus. He could be seen bolting across the grounds followed by forty children, like the Pied Piper, all chasing him for a game of football. It was so wonderful to see such joy, from two footballs, and it reminded us how easy it is to take things from granted at home.

Mrs Napakoli then invited us to join her on her walk home for a soda, at the end of the school day. After a beautiful walk through a more rural area, seeing some very cute piglets, very friendly people and lots of corn fields, and arrived to the headteachers house. Her whole family started pouring out onto the driveway to welcome us, and what a warm welcome it was, full of hugs and selfies from her children, grandchildren and husband. We were made to feel like part of Mrs Napakoli’s family, fed a delicious feast of rice, chicken, chapatis, Irish potatoes and juicy watermelon and after another quick snapchat demonstration, we piled back into the minibus to our next destination.

Mr Walyaula was waiting patiently for us at his family home; an hour away, as our busy itinerary meant we were running a bit behind schedule. We were really grateful that the torrential rain as the bumpy road to his house was extremely steep and by his point, it was very dark! As the minibus pulled up, thumping bass could be heard from inside and we followed our ears into Mr Walyaula’s living room. The stereo was pride of place in the centre and we realised he obviously loves to boogie! After having a soda and a filling him in on what he can expect when we visits Wales in the next couple of months, we sat down to another yummy meal. The team have certainly developed a taste for chapatis and tucked into another plate-full.

Mr Mansfield briefed Mr Walyaula on how to use his new school laptop, before to presented our him and his wife, Agnes, with a few personal gifts from home to say thank you for their hospitality and for making our trip such a pleasure. He was delighted with his Welsh swimming shorts and sunglasses and we think It’s safe to say he has found his new favourite food – welsh cakes.

By this point, the team had started to get a little sleepy after their busy day. We set off once more, for our hotel, not before admiring the sky full of stars, visible without the light pollution of Mbale town.