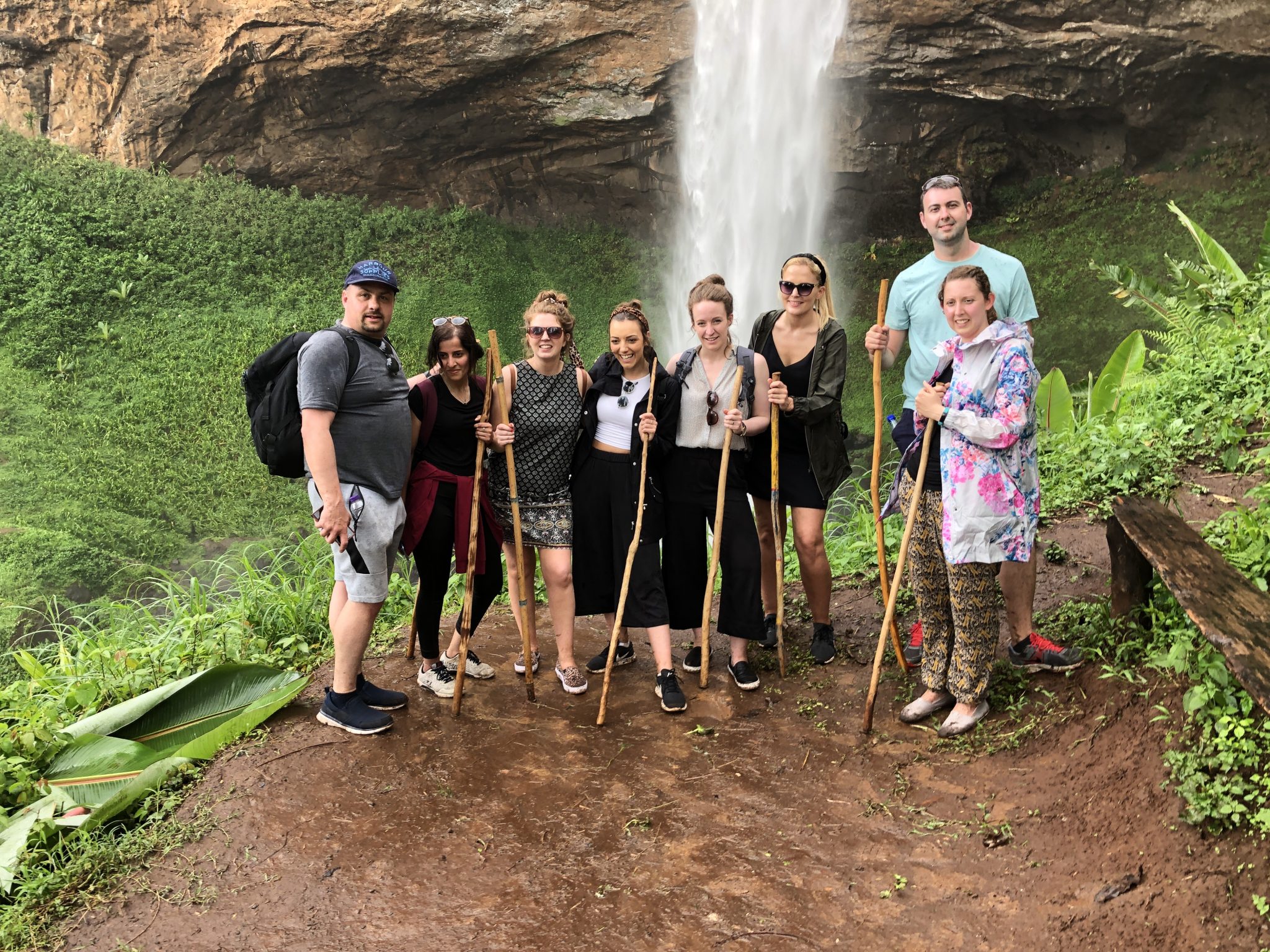 After the most sleep we’ve had since arriving in Uganda, we were feeling fresh and ready to start day 4 of our Ugandan adventure. We gathered for breakfast dressed in our finest clothes ready for a visit to the local church.

As soon as we arrived at the church, we could hear the incredible singing from the church rock band and took our places on a pew, eager to join in. We danced along with the energetic moves demonstrated by the band and attempted to match their incredible voices (Mrs Lewis was the only one able to keep the tune). As the songs got faster and more exuberant, so did the moves we were expected to join in with! We ended up very hot and sweaty and decided this was more of an exercise class than a church service! Miss Butcher was completely in her element learning all the new dance moves.

Mr Mansfield was called to the front to introduce us all and explain why we were here. As always, he didn’t require a microphone to speak as his voice could be heard right across the village without one and he had the whole congregation laughing within seconds! He was then summoned to the piano, looking a little terrified as had no idea what he was expected to play. However, as soon as the band started up, with Joseph on the drums, his musical fingers went into action, flying across the keys to Amazing Grace and the other songs they were shouting at him to start playing.

We left the church more uplifted than when we arrived and promising we would be back for more singing in the future.

After a quick change into some comfier clothes, we set off towards Sipi Falls in the minibus, with Mr Mansfield and Joseph following on Boda Bodas (small motorbikes).

Mrs Lewis and Miss Butcher saw their chance to tick another thing of their bucket list and hopped on the back, too. They discovered this was the best way to see a country, with the wind in their hair and the luscious, green scenery whizzing past. We drove for 1 and a half hours, everyone loving their turn on the back of the boda-bodas, despite all the stares we got from the locals, who weren’t used to seeing ‘Muzungu’/white people on Boda Bodas!

We arrived at Sipi Falls in between rain showers, to see the most beautiful view that stretched as far as the eye could see. The main waterfall, which was 120m high, was a sight to behold; even the sound of the water crashing to the river below was incredible. The team sat down for some lunch. Mrs Lewis said that we should all be eating Ugandan food but Mr Mansfield insisted that there would be plenty of opportunities for that throughout the week and to take the opportunity to go for something a little more familiar… shortly after, a trusty burger AND a full plate of macaroni cheese was placed in front of him as he smiled with delight.

Whilst we waited for the rest of the food to be delivered, we took our chance to get more photographs of the beautiful view! We’ve even started using the phrase ‘it’s for the blog’ to excuse the amount of photograph-snapping each day. The beautiful scenery and crashing waterfall in the background made for a picture-perfect postcard!

Sam Walyaula decided to sit very close to the edge whilst waiting for his food and we joked he may fall and roll down the bank into the fall. This made Miss Butcher wonder if Sam had ever done a forward roll before and upon discovering he hadn’t insisted that he give it a go! It took a few attempts and lots of laughing before (with a little shove from Miss Butcher) Sam managed to complete his very first forward roll! A great achievement and lots of entertainment for the group and the passers-by!

The view from our lunch spot was one to remember. The team sat in a line so they could take it all in – the waterfall, the jungle, the steep cliffs and beyond, flat land stretched as far as we could see. Mr Mansfield realised he’d made a mistake ordering a burger when he saw Mrs Lewis’ delicious chicken stew and Miss Butcher’s yummy beef stir fry, but he ate it up all the same.

Job, the happiest man around and our host at Sipi Falls Lodge, then started hurrying us up as he wanted to take us on a hike down to the bottom of the waterfall. The sun was shining brightly as we set off, each with a wooden walking stick in hand, ready for today’s adventure. We realised we were in for a treat when Job led us down a steep gorge, climbing down through a gulley with water running along the bottom. Although our trainers immediately became soaked, Job kept us entertained with words of encouragement, little dances along the footpath and a few breathing techniques.

The further down into the valley we went, the darker the sky became and the louder the thunder crashed. Suddenly the heavens opened and it poured with rain. Luckily we had met some very friendly locals along the way who handed us large banana leaves to use as umbrellas and one man even welcomed us to shelter by his hut…for a few shillings of course. We stood for a while watching the rain hammering down, worry about how muddy and slippy the paths were becoming.

In Uganda’s rainy season, almost as quickly as the rain starts, it stops. We continued along the very slippy and muddy path, holding on to our hiking sticks, trees and helpful local boys for dear life. Miss Butcher was very grateful to Mrs Tyler for preventing her from sliding down the bank a number of times! When we reached the bottom of the waterfall, we took the opportunity for some more photos (‘for the blog’) and introduced Jobe and Mr Walyaula to the Snapchat filter that changed their face into a girl’s face! This made them almost cry with hysterical laughter!

On the way back up the steep path, the sun started to dry us all off and Miss Butcher wanted some music to motivate her to finish the steep climb. Job didn’t have a huge selection on his phone but it was enough to get everyone dancing. When we finally reached the village again, with the view even more stunning in the setting sun, it seemed the perfect time for a dance lesson. Miss Butcher, Miss James and Miss Chard tried to teach Job, Joseph and Mr Walyaula ‘the floss’ but despite their earnest attempts, they found it very difficult! We think the children of St. Julian’s Primary could have done a MUCH better job!!

Back at the minibus, Mr Mansfield realised his neck was now looking rather red from the sun. As we stood at the top looking out at the beautiful sun setting across the Ugandan backdrop, the whole team agreed it had been a very happy day, full of amazing singing, friendly people, incredible views (and some interesting dance moves).

Our drive home was a sleepy one for most of the team, but not Miss Butcher and Miss Badat who looked like very cool bikers on the back of the boda-bodas once more. Mr Mansfield swallowed a fly as he rode and Miss Butcher got hit on the forehead with a larger unidentified flying insect (both are fine and well!)

For now, we are off to bed looking forward to tomorrow!