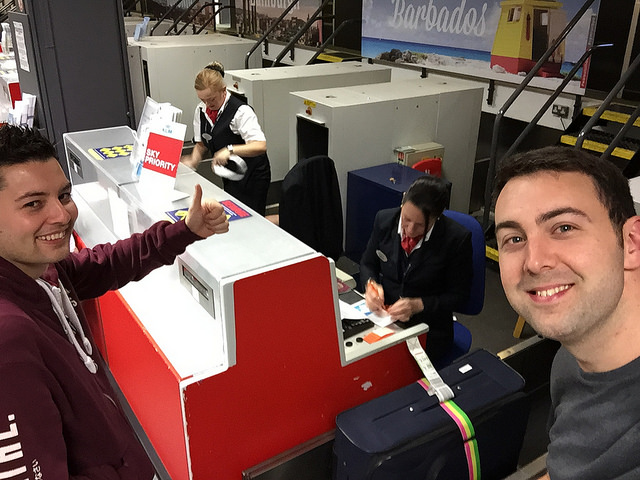 So here we are; the trip has begun! Mr Prewett set off at 3am to collect me and then drive to Cardiff Airport. Half way to the airport, I thought I’d forgotten my wallet, so we turned back around and drove home again. Turns out it was in my suitcase all along! Great start!

We arrived at the check-in desk and one of Mr Prewett’s suitcases was over the 23kg limit, but thankfully Karen, the check-in lady, was enjoying our jokes so much that she let the suitcase through without the £145 extra-baggage fee that she was supposed to charge!!

We then met up with three other teachers: Miss Joseph, Miss West and Miss Lloyd, from Treorchy Comprehensive School, who are also flying out to Uganda. They were slightly later than us to arrive at the airport, and the queue to the check-in desk had grown significantly, so we left them to it and went to join the queue for the security check. Our bags were scanned and I passed through the scanner without a problem. Mr Prewett, on the other hand, set off lots of alarms and beeps and had to be searched by the security guard. (I tried to take a photo for you, but wasn’t allowed!!) Thankfully, it was just the metal zip on his jacket, so they let him through.

We’re currently sat in the departure lounge waiting for our flight to board at 6:05am. We fly from Cardiff to Amsterdam, then onto Rwanda, and finally from Rwanda to Entebbe Airport, Uganda. We were supposed to fly directly from Amsterdam to Uganda but we had an email saying that the flight had been cancelled, so we’re now flying via Rwanda.

When we arrive in Uganda, we’ll hopefully be collected by a gentleman named Apollo, who will look after us whilst we are there. Because we arrive in Uganda so late, we’ll be staying in a Hotel near the airport for our first night, but the following morning, Apollo will drive us over to Mbale, where we’ll be based. It’s a five hour trip across Uganda from Entebbe Airport to Mbale, so we’re hoping to stop at a couple of places along the way, to see the scenery.

Both of us are really excited for the trip and we can’t believe how quickly it’s come around. Whilst out in Uganda, we’ll be working with a local school called Busiu Primary School. We’ll also be visiting a local orphanage.

We’re hoping to use the money raised from our non-uniform day to buy school supplies and gifts for the children. Thank you SO much to everyone who also sent in donations and gifts. We have literally been blown away by your kindness and generosity. We’re looking forward to updating you on the children’s reactions when they receive your gifts.

We’re just about to board our first plane, so we’ll update you when we arrive in Amsterdam. Have a good morning!