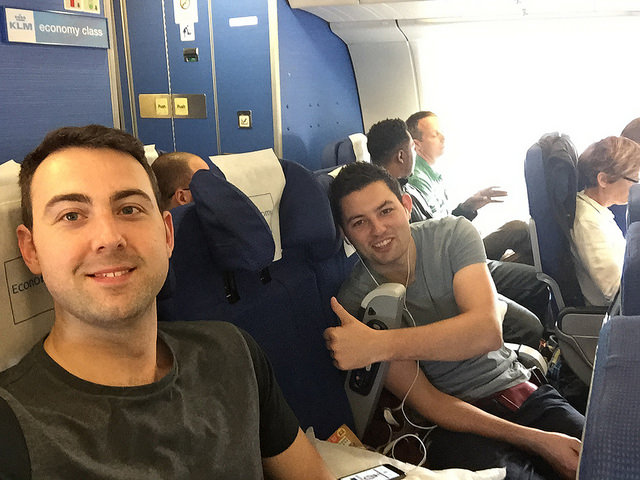 The Steward Selfie, the Sandwich and the Pillow

So you’ll all be pleased to hear that we landed safely from our first flight. It was great to see Karen (the kind lady at the check-in desk) again at the departure gate. She came up especially just to see us off on our travels. We showed her the blog and she promised to follow our entire trip, so a big shout out to Karen if you’re reading! Also, you may have noticed that there were two extra teachers in the photograph in the last blog. They’ve also joined us for the trip, from Heol Y Celyn Primary, in Pontyprydd.

We boarded the plane and found our seats without any problems, but they did take my hand-luggage case off me as they felt it was too big to fit into the overhead compartment! I wasn’t happy about being seperated from my laptop for a whole hour, but somehow, I survived!

We were sat next to eachother for the flight; Mr Prewett had the the window seat and I had the aisle seat. As we taxied over to run-way, we thought it would be a great time for a ‘selfie’. It just so happened that the flight attendant was giving his safety presentation behind us and noticed that he appeared in the background of the photo. He wasn’t happy that he was in the photo and so asked us to delete it. Shame; it was a good photo!

Half-way through the 1-hour flight, they brought us a drink and an egg and spring-onion sandwich. Mr Prewett was impressed with the way that “the spring onion complimented the egg” and says he will now be more adventurous when making egg sandwiches.

When we arrived in Amsterdam, we had an hour or so to wait until our next flight, so we all went for a Starbucks. Mr Prewett went for the ‘Classic Hot-Chocolate’ whilst I went for the healthier option of a green tea. It was a good opportunity to sit and chat and get to know the other teachers before we arrive. They all seem great. It also turns out that one of them was in school with Mr Rees’ eldest son!

After the visit to Starbucks, we made our way to the other side of the terminal to find our departure gate. It was a long walk, although there were some moving walk-ways to help us out. As we arrived at the departure gate, Annabel, one of the teachers from Treorchy Comprehensive realised that she had left her travel-pillow on the seat in Starbucks. Being the kind gentlemen that we are, Mr Prewett and I offered to run back to collect it for her. Time was of the essence and the boarding had begun. As the queue started to move forward, Annabel decided that she couldn’t survive the flight without the pillow. Mr Prewett decided that I was more athaletic and should do the running and he should keep our place in the queue and hold the bags. Like the wind, I sprinted back through the terminal, darting and dodging people, suitcases and trolleys, until I reached Starbucks. Luckily, the pillow was still there and I was able to rescue it from a man who looked like he was about to use it. Over the tannoy came a final call for passengers to Uganda! I raced back towards gate 57 and made it just in time to join the group and reunite Annabel with her beloved pillow.

We’ve just boarded our second and final plane and this time, our seats are at the back in the middle. We were in a row of three with another gentlemen and I ended up in the middle seat. The air-hostess noticed It was rather cramped and offered the other gentleman a seat in a different row, leaving Mr Prewett and me with a row to ourselves; great success!

Just before take-off, we managed to video-call Mr Prewett’s class, back at school! Seeing the excitement on the children’s faces as we chatted to them from the plane, has definitely been the high-light of the trip so far! We also managed to have a quick chat with my class, too! We miss you all and wish we could have brought you all with us!!

As soon as we were in the air, we were brought a complimentary packet of peanuts, a drink, some headphones and a wet-wipe for a wash!

Now we’re all clean and fresh, we’re going to try to catch up on some sleep. Looking forward to updating you later in the flight!