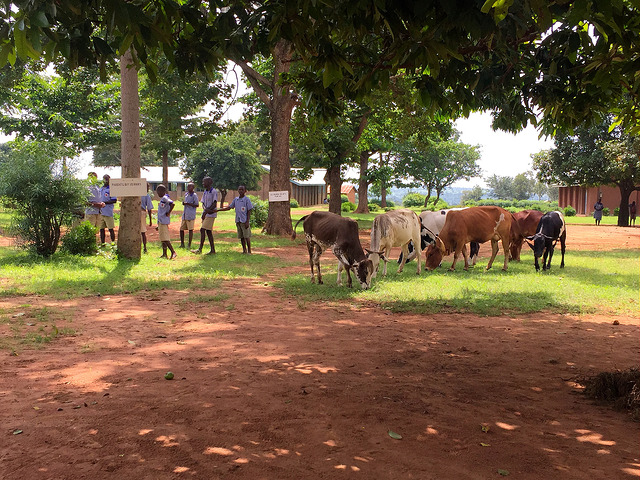 First Day at our School

Mr Mansfield and I woke with that excited feeling you get for the first day back at school. We were up bright and early for breakfast before our transport arrived to take us to school; all that was missing was waving goodbye to our mums!

We were told that our school wasn’t too far away but as we’ve already discovered, timings are not their strong point! After an hour or so of travelling along some bumpy roads, we could see we were getting further and further from the city of Mbale. On the way, our guide for the day, Eleanor, told us that currently the teachers in Uganda are on strike. That meant that we did not really know what to expect as we arrived; Eleanor wasn’t sure if there would be many teachers in school or even many children!

Eventually, we turned down a narrow dusty track signposted ‘Busiu Primary School’. Our fears of arriving at an empty school faded, when we pulled up and began to see many children walking around in their bright blue uniforms. We were welcomed by Sam, the Headteacher, who was delighted to see us. He wasted no time in introducing us to some of his staff and giving us a tour of his school. He was very happy and friendly and was clearly enthusiastic about his school.

Busiu Primary is on a site similar in size to St Julian’s Primary. They have a church on site and are in the process of building a new one as their old church has become too small for the community to gather in. As well as the church, they had 11 classrooms, although they were incredibly different to ours! The classrooms were very dark inside, with dusty concrete floors, worn out chalkboards and cramped bench desks. Many children were squashed in each row and had barely had any room to work. Even though many children were not in school because of the strike, the classrooms were still incredibly full. We were astonished to see that where teachers had not shown up to work, the classes were being taken by the eldest child in the class. The class was still impeccably well-behaved and were listening to what the older child was teaching them.

As we entered each class, the children would say “Good morning Sir, welcome to P- class! You are most welcome.” We said a few words and then Sam asked them if they would like to be taught by us. The children in each class all shouted “Yes” when he asked this question. We had been told before arriving that their were 600 children at the school but Sam told us that there were in fact 1370 pupils, covered by just 27 teachers! Many of the classrooms had handwritten posters stuck to the walls, with pictures and words that the children would recite.

Aside from the church and the classrooms there were several houses in which some of the teachers live. Sam explained that sometimes it helps to attract good teachers if you have houses available on site. He showed us the Headteacher’s house and explained that he didn’t stay there as it wasn’t safe; the roof and walls were unstable and the doors were made of wood, not metal. Sam did say he was lucky enough to have a teacher trainer on site. He said this meant that he did not have to pay large amounts for his staff to travel to receive training. It also gave us some great ideas for things we could make to bring into school the following day.

Although there were several buildings on the site, the school used most of the land to grow crops.

These feed the teachers and the pupils but unfortunately, the school cannot grow enough crops to sell to generate income. As we walked around the school some more, Sam explained that they have suffered some vandalism lately. Their shutters have been ripped off the classroom windows and many local people kept using the water from their tap so they got rid of the tap and decided to use the bore hole further up on the site of the secondary school. Sam took us there to show us how far they had to walk to get water. Mr Mansfield ended up helping two boys who were filling up their water containers, although he was soon exhausted. It really made him appreciate how hard the children have to work to collect water each day.

After the tour around the school, Sam had arranged for some fruit to be brought out to us, so we sat down with Sam and Eleanor and asked lots of questions about school and the Ugandan education system. It was interesting how many similarities there were between our education system and theirs.

After chatting for some time we asked if we could go to observe some of the lessons. I went to see a P4 (Year 4) lesson about the weather and Mr Mansfield went to observe a P7 (Year 6/7) Maths lesson.

He was very impressed with the standard of Maths in the class. It was interesting to compare our styles of teaching to theirs. We both admired the teachers who had very limited resources and simply used the ‘chalk and talk’ method of teaching. My lesson finished early, so I went to join Mr Mansfield in the P7 maths class. We sat at the back of the class and the children loved sitting near us.

After observing the lesson, we played some football with the children but then it was time for lunch. Sam invited us into his office for some food, which consisted of maize bread, Irish potatoes and beef. Once again, we were made to feel incredibly welcome. Every time we ate, one of the staff helpers would come over with some soap and a flagon of water to wash our hands for us. We continued to talk some more about how school worked in Wales and the UK and Sam was fascinated by how we taught. He was particularly excited to have lunch in our staffroom and to go and see the sights!

We were collected from the school at around 2:45pm by our driver Medi, who took us to the market place to buy some stationary. We bought lots of pens, text books and things for the teachers to use in class. On the way, we were discussing what resources we could make for the school. We decided that we didn’t want to make or bring anything that the Ugandan teachers would not be able to make themselves. This posed a challenge as we are so used to having resources at our fingertips; the teachers here are not lucky enough to have access to paper and printers let alone laminate and double sided velcro! Between us, we managed to think of some great ideas for things we could make. We love using a ‘number stick’ in school and find things like our ‘hundred squares’ and times-tables grids useful in class. After a quick think, we asked our driver to stop off at a hardware shop at the side of the road. We bought some nails, some hessian sacks and some wood, things we had decided would be useful to make the resources we had in mind.

Once we had what we needed we travelled back to the guest house. It was a busy evening for Mr Mansfield and I. We were so excited to teach and make our resources that we didn’t want to waste a moment! We got straight to drawing some hundred squares and times tables grids on the hessian sacks that we had bought. We were very proud of them and hope that they will be able to make a difference to the teachers in the school. At the moment, all of their resources are on paper on the walls and they often get damp and ripped over time. Hopefully, if they are on hessian sacks then they will last longer and make the classroom walls nice and bright. Once we had made the sacks, we started thinking about putting our number sticks together. Mr Mansfield managed to measure 11 nails evenly across the wood we had bought and get all the nails in without hammering his fingers too much! We then had the problem of working out how to make ‘wood cookies’ (small circles of wood) to hang on the nails, with the numbers on! We found a very friendly security guard at our guest house who was keen to help. He took us into a storage shed full of very old looking equipment. It clearly hadn’t been used for a long time as some things didn’t have plugs whilst others were covered in cobwebs! The three of us managed to get some of the equipment working but (having tried a band saw, angle grinder and circular saw) we couldn’t find a way to get the wood cut into small circles. The kind security guard then offered to cut all of the wood cookies for us by hand! Mr Mansfield and I were so grateful as we had tried cutting one by hand ourselves and it had taken 15 minutes! By this time, it was getting very late and, wanting to save some energy to teach tomorrow, we had to head off to bed!

We are looking forward to teaching tomorrow now that all of our resources are (finally!) prepared! It should be a great day!