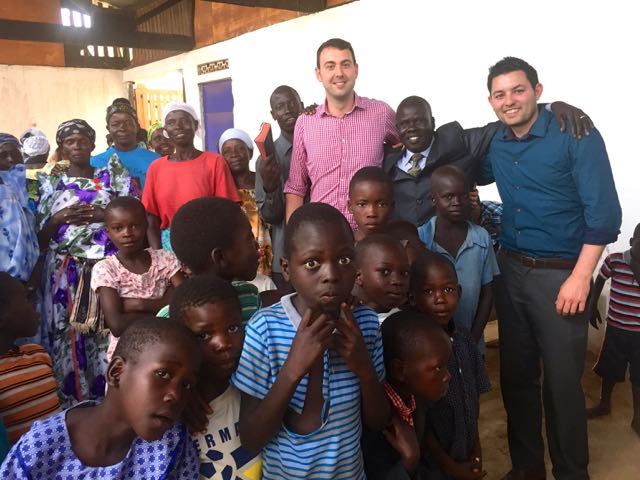 Melembe! (That means ‘hello’ in Lugisu). We’ve had yet another great day here in Uganda, although Mr Prewett was extremely tired after spending the night on my hut floor! At around 6am, he got up to go and see if the office had reopened, for him to get his key back but it hadn’t and so he was back on my floor until 8am, when the staff arrived to make breakfast. He did almost have an earlier wake up call, however, when I got out of bed to use the bathroom and almost stood on his head! We briefly met the team, for breakfast, and then headed off in separate directions.

In Uganda, it is a very traditional to go to church on Sunday morning and we had been invited, by two Ugandan Pastors, to experience what a Ugandan church was like. Naturally, we jumped at the chance to gain further insight into Ugandan culture and agreed to attend. The rest of the team went to Pastor Apollo’s church and Mr Prewett and I agreed to go to Pastor Robert’s church. A driver was supposed to collect us from our guest house at 9am, but running on ‘Africa time’, he arrived very late. He drove us to Pastor Robert’s church, where we received yet another incredibly warm welcome.

The service started with some excellent singing, extremely energetic dancing and a lot of clapping! Then, Pastor Robert introduced us and asked us to say a few words about what we are doing in Uganda. We gave them greetings from St. Julian’s Primary and talked to them about the schools we’ve been working with. Only one or two of the church members spoke English, so we had to speak through an interpreter, which took some getting used to!

After we had talked to them about our ourselves and our school, there was more singing, clapping and dancing. We were, of course, excellent dancers after the practice we had had yesterday, at Mount Elgon Hotel. We were pulling out a variety of traditional African dance moves and joined in with the celebrations wholeheartedly! The church choir then performed for us and they sounded amazing; there really is something about African singing!

It was then that fear struck. Pastor Robert turned to us and said “…and now, our Welsh visitors, it is your turn to sing for us”. Panic set in as the whole church congregation turned and stared at us, with wide smiles and faces full of anticipation. We both laughed nervously at first, hoping that they would get the hint that there was no way we were going to sing for them, but with a completely serious face, Pastor Robert then asked us what we were going to be singing. I continued with the nervous smile approach, convinced that they would soon just move on with the service but as the second hand on my watch slowly ticked around, it become increasingly more obvious that nothing else was going to happen until we had sung. Mr Prewett then started to discretely pinch my arm, in a subtle attempt to say ‘do something!!’. With that, I started rack my brain for songs that we could sing, but all I had going around over and over in my head was ‘Let it go, let it go’ which rapidly changed into ‘Let US go, Let US go…’ as they started clapping to welcome us onto the stage. I quietly whispered to Mr Prewett, “Let’s do one of our assembly songs”, as we rose to our feet and stood *Frozen* in front of our expectant audience. Before I knew it, we began belting out “Thank you Jesus, Thank you Jesus, Thank you Lord for loving me”, an assembly song which our Foundation Phase pupils sometimes sing. After the first time through it, we began to gain more confidence and by the end of the song, we had everyone on their feet, clapping along to our singing… which was incredibly out of tune but strangely enough, we both rather enjoyed it! That being said; this was the first time I had ever sung a duet with Mr Prewett and I really hope it will be the last… for everyone’s sake! I think it’s safe to say that there will be no record deals coming our way any time soon. The congregation were very polite, however, and gave us a tremendous applause.

The music leader at the church, James, then jumped back to his feet with his Agogo (a traditional African instrument a bit like a guitar) and lead us in some more energetic singing and dancing. We were completely shattered as it felt like we were taking part in a ‘Zumba’ session at the gym! We must have looked completely ridiculous and I’m sure everyone was laughing at us, but there was such a great sense of joy and happiness as we all danced and sang together.

Mr Prewett and I were then asked to speak again. I told them how wonderful it was to spend the morning with them and how privileged we were to have been invited, and Mr Prewett shared an inspirational thought for the day!

At the end of the service, we took some photos with the whole congregation and had the opportunity to hand out some toys to the children. We gave them some cuddly teddybears (donated by Mrs Thomas), some bubbles (donated by Morrisons) and some plastic jewellery.

After church, we had arranged to meet the rest of the team for a meal at a local restaurant. I asked Pastor Robert if the driver would be able to take us back, but he insisted that we come to his house for lunch. We were truly honoured to be invited to his house to eat with his family and felt we couldn’t refuse, so we ditched the team and went home with Pastor Robert. His wife cooked us a delicious meal of rice, goat’s meat and chicken. To us, making lunch for somebody isn’t a huge deal, but sitting in Pastor Robert’s very humble home and seeing how much effort his family had gone to, in preparing us a meal of their best meat, made us both think of how much we take for granted. I think we’ve mentioned it in most of our posts so far, but the kindness of people here has literally blown us away. After lunch, we had a photograph with Pastor Robert and his family and were then driven to the restaurant at which the rest of the team had eaten lunch.

Our driver then took us all to ‘Sippi Falls’, a series of breath-taking waterfalls in the Ugandan mountains. The bus dropped us at the top of a mountain and we then had to climb down the steepest drop I’ve ever seen, to reach the bottom of the waterfall. Some children hung about at the top of the cliff, waiting for Muzungu to arrive, to help them down the steep slopes and steps. As I climbed down the first rickety wooden ladder, a small boy shot underneath my arm and took my hand. His name was Jimo and as we climbed down the path together, he told me how he wanted to be a doctor when he grows up. His friend, Nosa, wanted to be an engineer. It was so inspiring to hear them talk about their dreams and aspirations, despite them being dressed in torn and ragged clothes; some of them, even with nothing on their feet.

We reached the bottom of the path, where we had a spectacular view of one of the waterfalls. We had a short photoshoot at the bottom, with our new friends, before making our way back up the path. Mr Prewett thoroughly enjoyed being hoisted up onto Joseph’s (one of the tour guides) back, standing next to the waterfall.

On the way back up, Jimo once again, ran after me to ensure I made it safely to the top of the cliff. By the time we had got back to the top, I think I can safely say that Jimo and his friend, Nosa, had completely broken my heart. Two children clearly with so little in the way of material possessions, but yet who were so happy.

On the way home, we stopped at the ‘Sippi Falls Lodge’ for a quick cup of coffee. Julius, a local tour guide, gave us a talk on how coffee beans are picked and prepared. Some of the team bought coffee beans from him, to take back to the UK. Upon arriving back at our guest house, we visited a local craft shop, run by a charity which supports African widows. We purchased some gifts and Mr Prewett and I even bought some African shirts, which are being tailor made for us! We look forward to modelling them when we get back to school!

Supper, tonight, was vegetable Lasagne and fresh Mango for dessert. It was great to eat with two other people staying at the guest house, Matt and Christina, who are engineers from the UK, working on building a solar panelled water pump, which will help to pump water for the local villagers to drink and give to their animals.

We’re heading into our partner school tomorrow; Busiu Primary School. We’re really looking forward to meeting both the teachers and the pupils. Need to get some beauty sleep!

PS- you’ll be delighted to hear that Mr Prewett remembered to collect his hut key from the office, earlier this evening and so he is back in his own room, tonight!

PPS- We heard yesterday that we had made it into the South Wales Argus!