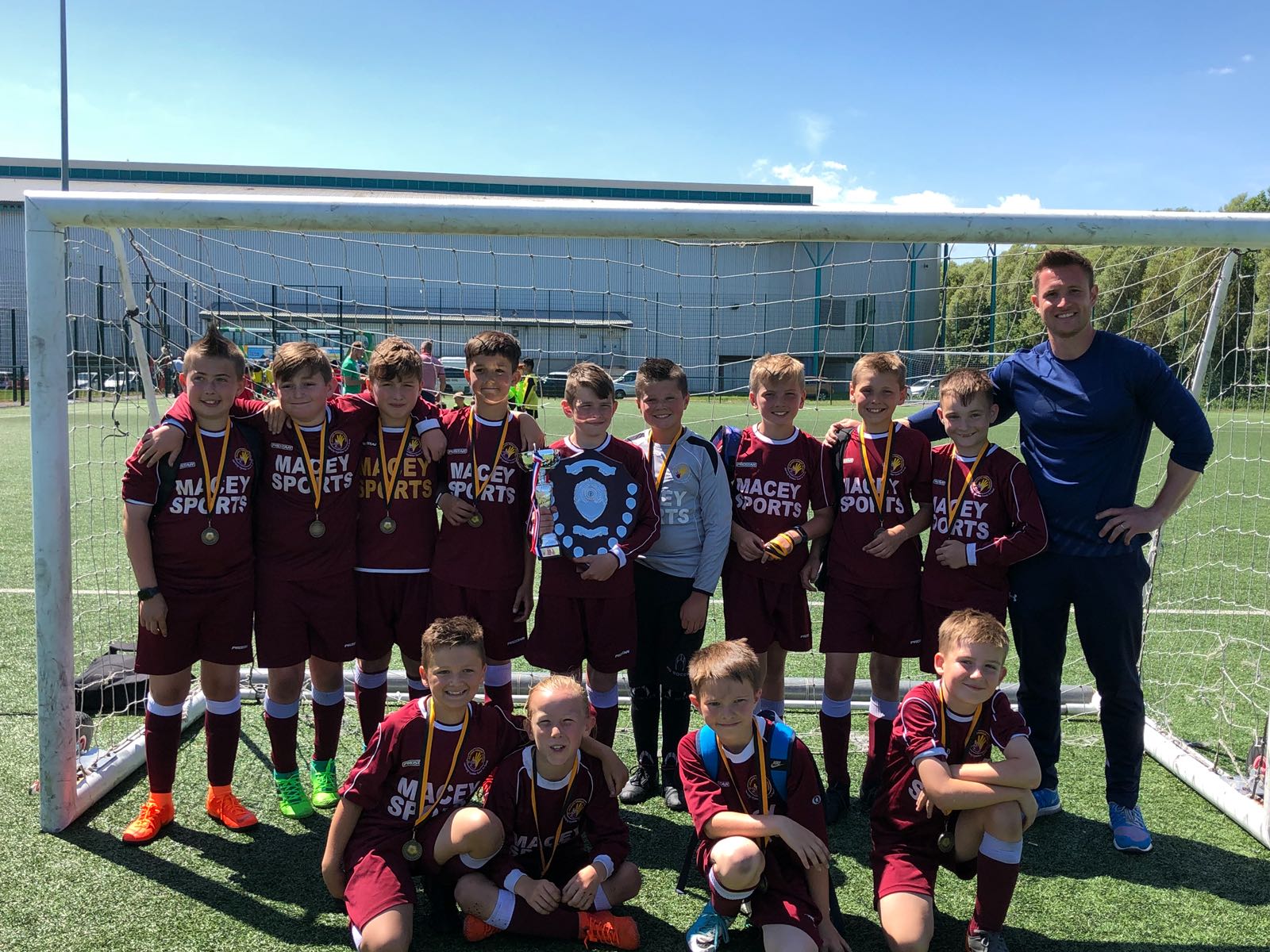 Sun, fun and football. A perfect end to the first football league season. 11 schools from across Newport came together to celebrate what has been an action packed first season of the ‘Newport Primary Schools’ football league. The sun was shining and the children, teachers and parents were all raring to go.

After a brief introduction from Mr Jones and Dan Harvey, the eagerly awaited tournament was underway. The four pitches held fixtures between both West and East league schools as they hadn’t had chance to play due to the structure of the league.

Each school brought along a team of 10-12 children from years 5&6 with matches being played 8 a-side. It was end to end action all day!

From the first whistle, teams were producing fantastic football skills and teamwork. It was excellent to see schools from across Newport having the opportunity to meet other children in a sporting environment and make so many new friends.

Most games were nail bitingly close, with children hitting the posts on numerous occasions. Many teachers and parents commented on how impressed they were with each team’s performance and sportsmanship throughout the day.

One of the main events of the day was the final between the East league winners, St Julian’s Primary School, and the West League winners, Charles Williams Primary School. The two teams found themselves in the final after their strong, consistent performances throughout the season. The eagerly awaited final kicked off at 12pm with the side lines packed with parents, teachers and other supporting schools who were all desperate to see who would be crowned the first ‘Overall League Winners for 2017-18’

This helped build excitement ready for the re-match in the final.

The match started with both teams adapting a cautious approach, not wanting to give the other team any opportunity to score. It didn’t take long however for both teams to have opportunities to score, seeing balls narrowly missing the target and even rattling the posts at times. Communication, team work and determination were evident from both teams.

Just over half way through the first half St Julian’s scored with Aron creating a string of passes with mid-fielder Archie and striker Danny, before putting the ball into the back of the net himself.

This certainly lifted the confidence levels amongst the St Julian’s team and saw them create more fantastic opportunities which were quickly stopped by Charles Williams’ excellent goalkeeper.

The second half started with Charles Williams applying the pressure and testing the defence of St Julian’s. With players attacking from the left and right wings, St Julian’s found it difficult to intercept the ball and stop them from scoring.

With the sun beating down and the players becoming tired, the opportunities continued to come at both ends of the pitch. However, with a fantastic save from St Julian’s goalkeeper, Connor, he quickly saw that Danny had space up front with  potential to score. He precisely played a long ball into the feet of Danny who carefully controlled the ball and passed it into the feet of Archie. Looking up, Archie decided to play a through ball to Danny who had run into space and finished the series of play by smashing the ball into the net making it 2-0.

Undeterred, Charles Williams didn’t give up hope and still continued to attack putting St Julian’s under pressure. With his goal saving tackles and impressive work rate, Seb, St Julian’s left back, made sure no one got past him in the last few minutes of the game.

The final whistle saw the game finish 2-0 and St Julian’s Primary School crowned ‘Overall League Winners’. It was a fantastic performance from both teams who should be extremely proud of themselves.

If that wasn’t enough football for one day, all schools still had another 2 fixtures to play before the presentation of medals and trophies.

We were very grateful to have Chief Education Officer, Mrs Sarah Morgan, and the president of the Newport Rotary Club, Councillor Graham Berry, to present the trophies and The Ron Morris Shield.

Each player who has participated this year received a medal for their hard work and commitment to the team. We’d like to thank Macey Sports for supplying the medals, trophies and shield.

We’d also like to thank Newport Rotary Club for their very generous donation of the Ron Morris shield. Ron Morris was once a professional football player for Crystal Palace and Mayor of Newport in 2001-2. He has been very supportive of the league and we are very grateful for this.

Thanks to ‘County in the Community’ and the ‘Newport Live’ team for their support with the league this year and their help with the organisation of today’s tournament.

A final big thank you to all children and teachers. Without your help and participation this would not have been possible. We look forward to next year’s season where additional schools have already joined and I’m sure it’ll be just as exciting!

Well done @StJuliansPri and Mr Jones and Miss Shepherd for leading on the day. Championi’s!!!! Lovely to be part of the tournament as a parent, governor and with @nlsportsdev hat on as well! pic.twitter.com/h4lZKnQOzB