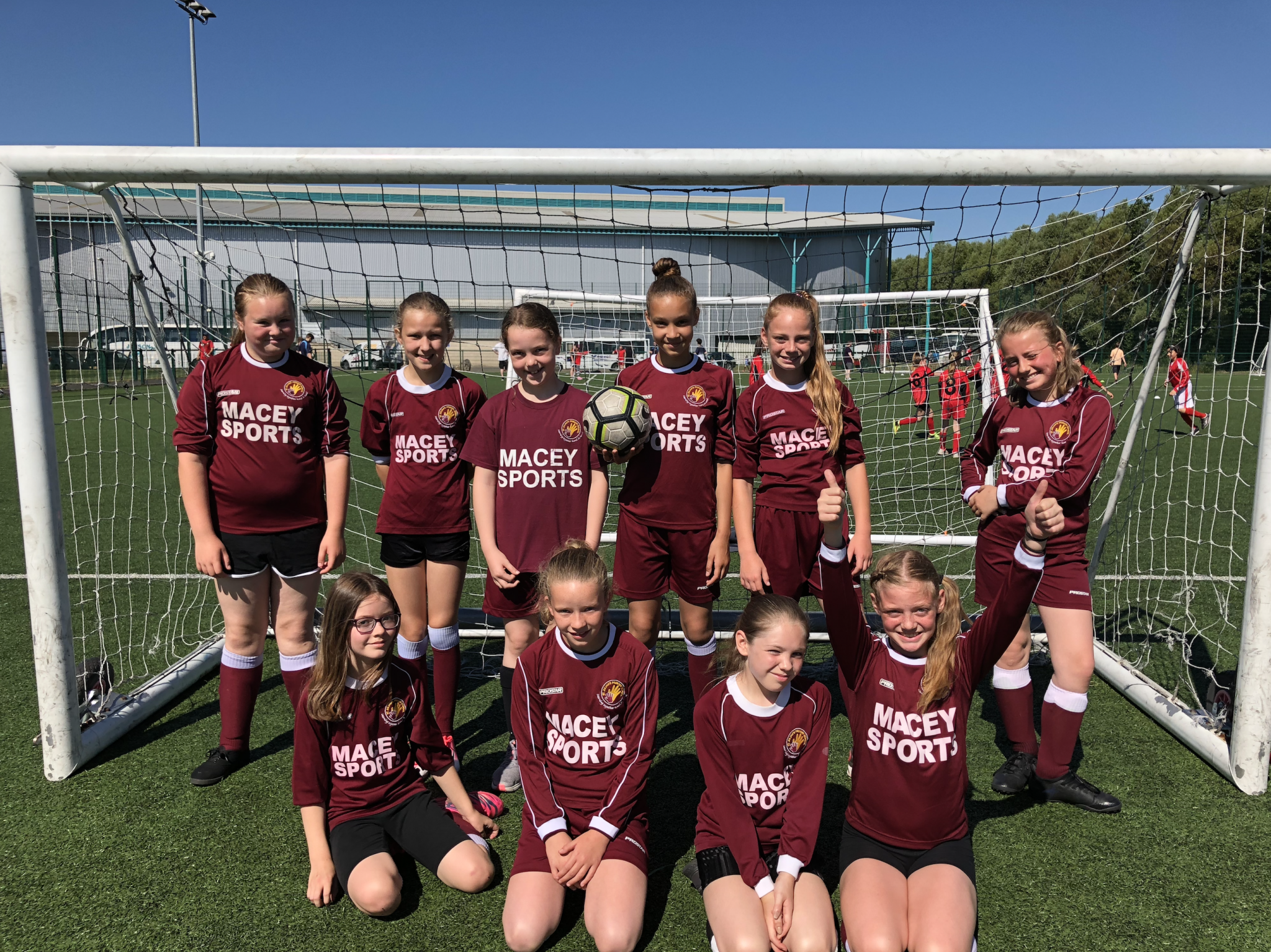 Another sunny day for a fantastic football tournament lead by County in the Community and Monmouth Comprehensive School’s Welsh Baccalaureate students.

It was fantastic to see so many school’s girls football teams with impressive skills and sportsmanship on display, with the opportunity to play competitive games in a friendly and supportive environment.

We arrived at the 3G pitch already proud of our achievements, as we haven’t had many matches in recent months and eager to play the wonderful game. Due to the weather our matches were eight minutes long with no halves but with rolling substitutions so we were able to keep well hydrated.

Our first two matches against Coed Y Garn and St Woolos were a success and we played confidently, passing the ball with ease to our team members in space which eventually lead to two goals in each match.

The next match against Glasllwch was well matched and both sides’ defence was commendable with a number of crucial tackles to keep the game a draw.

Next, we played Eveswell Primary an opponent we had played before at the beginning of the year and knew the callabore of players in the team. With a string of great passess Eveswell took the lead and eventually won the game 2-0 however, our strong defence and goalkeeping kept Eveswell under control towards the end of the match.

Our penultimate match was against Cwmffrwdoer, another strong team who really tested our strong defence. We were able to get a few shots on target however, their goal keeper completed some excellent saves. Although, we could have called upon the use of VAR after a controversial decision. Who needs to watch the World Cup with all this excitement?

At this moment we were keeping a close eye on the other matches as we were very close to qualifying for the quarter finals. We grouped together and reminded ourselves of our achievements so far in the tournament before competing in our final game against St Andrews. The game was another nail biter, with opportunities at both ends but both teams’ defence was just too strong. The game ended in a 0-0 draw. We congratulated the other team and crossed all our fingers and toes in anticipation for the announcement of the qualifying teams.

After totalling up all the scores the judges announced that we had qualified for the quarter finals, finishing third in our group. This was completely beyond our expectations when we arrived at the tournament and we now had a spring in our step and even more confidence.

Our quarter final game against Beaufort Hill was end to end. Lots of shots on target and unbelievable saves from both keepers. The game ended in a draw and had to be decided on penalties, something we weren’t used to. Three girls were chosen to take the penalties Carly, Laila and Chloe; and Cadence was confident in her own ability in goals. Our first two penalties were on target and something Cristiano Ronaldo would have been proud of. A great reaction and save from Cadence meant we were winning 2-1. It all came down to our final penalty and as cool as a cucumber, Chloe slotted it into the net. Celebrations and hugs all round for the girls, showing just how much it meant to them.

On to the next game, with even more confidence against George Street Primary. Both teams played exceptionally and a great strike from one of their players put George Street in the lead. Determined as ever we continued to push the ball up the field but unfortunately the final whistle came. Handshakes all round for the girls who had shown great resilience and perseverance.

An incredible performance by all the girls who took part in their very first tournament. Miss Shepherd was very impressed by the team work, commitment and determination throughout the tournament, with many teachers praising the way our team played. We look forward to continuing our hard work next year and hopefully more events like this will encourage girls to take part in competitive football games.