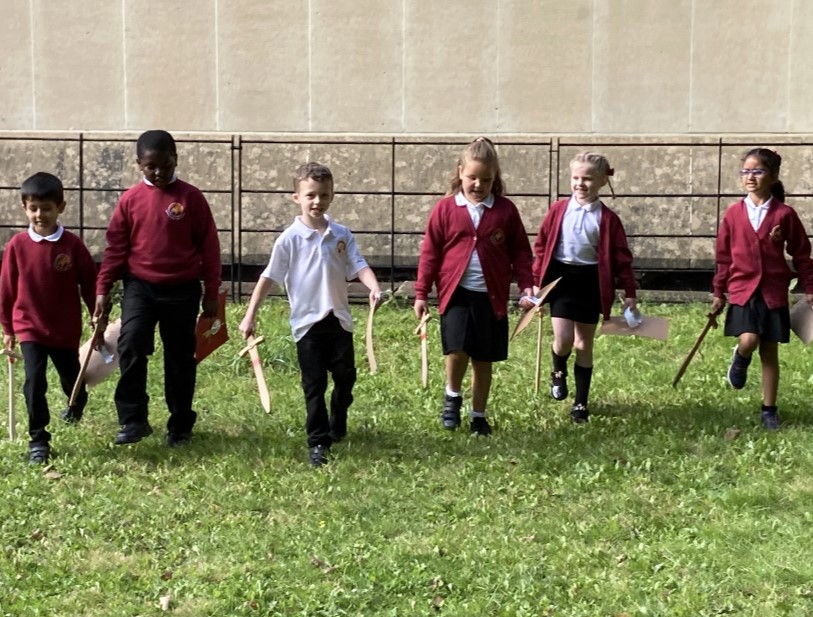 Year 3 have had an exciting half term settling into Key-Stage 2 and they have adapted extremely well to many changes in routine. We are all feeling very proud of how they have shown great resilience and perseverance with their learning.

Our first theme of the year has been Rocks, Relics and Rumbles which has incorporated finding out about life in Roman times, different types of rock and an introduction to volcanoes. The eruption of Mount Vesuvius, which led to the city of Pompeii being buried in volcanic ash, fascinated the children and led to some excellent creative writing, including a diary entry and a list poem, in which the children yet again, blew us away with their imagination and creative minds. This natural disaster from 79 AD leads us smoothly into the next half term’s theme of Natural Disasters- and a continuation of the Rumbles theme.

We were all very excited to visit the Roman remains at Caerleon in September. The children had an amazing time and thoroughly enjoyed marching around the perimeter of the amphitheatre with their hand-made shields, chanting their rousing battle cries. As a result of this trip, the children learnt lots of interesting facts about day to day life at Caerleon (once known as Isca), which has had a fantastic effect on the quality of work, which has been produced in the classroom.

We have also been learning about Roman medicine and how the Romans used herbs and spices to cure minor illnesses. We also found out that you could become a doctor without any form of training or qualifications…yikes, imagine that! Following this, we took a trip to our Forest School area to create our own medicine to cure something of our choice!

More recently, we have been super Roman carpenters and have put our measuring and woodwork skills to the test to make Roman-style catapults – we can’t wait to test them out after half term!

Once again, we have been lucky enough to be taking part in the Spring Bulbs for Schools investigation organised by the National Museum of Wales. We will have planted our daffodil and crocus bulbs before half term and in the following weeks and months, we will be collecting weather data daily to submit on a weekly basis. We are looking forward to seeing whose bulbs will be the first to flower.

A regular visitor to our school in the past has been Janice from Gateway Rugby and we are really pleased that once again, she has been visiting on a fortnightly basis, to teach Rugby skills to the children in Year 3. The sessions take place outside and there is no physical contact so everyone is safe! This term Miss Thomas’ class has been taking part in the sessions, but Miss Millett and Mrs Parry will be having their turns in the Spring and Summer terms.