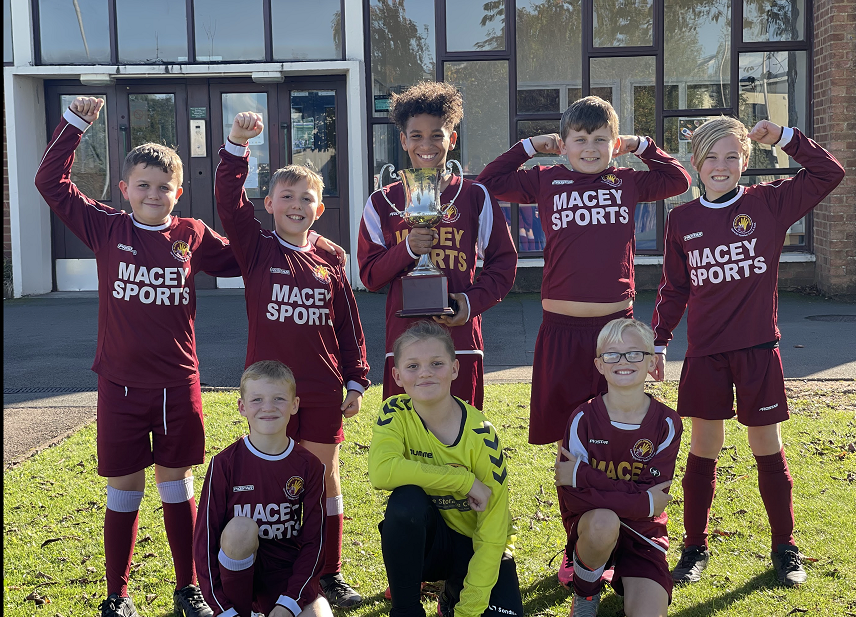 On Thursday 21st October, the school football team took part in the annual Newport County EFL Football Tournament. The current team were aware of the previous year’s success and were desperate to give it their all. The team consisted of 8 talented and dedicated players; Harper, Kieran, Sebastian, Sergeant, Kobie, Kallum, Joshua and Harley.

With the sun shining, it made for perfect playing conditions and the children were in high spirits to be back playing in tournaments again.

For the first game the team were up against the strong and talented Glan Usk Primary School. With the teams only 6 aside, all players contributed a great deal and supported each other throughout the match. Both teams had their chances and the ball narrowly missed the goals at times. There were even a few shots saved by the post. One particular player who stood out in the first match was Harper, our goal keeper, who was kept extremely busy throughout the day. After an enthralling 20 minutes the match finished 3-1 to St Julian’s.

The team started their second match full of enthusiasm and were determined to get a win. Up against a very talented and skilled team, Caerleon Lodge Hill Primary, St Julian’s found themselves having to defend their goal and ensure they made every pass count. The pressure and persistence to retain the ball soon paid off with a fantastic goal from Sergeant. It truly was a superb solo effort. It was evident that the goal had given the team the confidence that they needed. The match finished St Julian’s Primary 1 – Caerleon Lodge Hill Primary 0.

Although the team had played so well in their previous matches it was vital they won their next game to secure their place in the semi finals of the tournament. The other teams in our pool had also played very well. The match started with both teams applying pressure and trying to keep possession of the ball. Again, Harper was tested regularly in goals but with his superb goal keeping skills and our strong defence we managed to keep the ball out. The match went on with Josh, Seb, Harley and Kieran linking up well and creating excellent opportunities for our strikers. The final whistle blew bringing the group games to an end and a 3-1 victory to St Julian’s against a strong Eveswell team.

The team’s hard work had paid off as they went confidently into the semi- finals against Langstone Primary. As Mr Jones and Mr Mansfield watched from the sidelines (with their hands over their eyes at times), both teams created opportunities and the game could have gone either way. Our super subs Kobie and Kallum provided the strength and support the team needed at this vital moment. With only minutes to go, Harley seized the opportunity when he saw the Langstone’s goalkeeper had strayed from his goal line. He placed a perfectly weighted shot high into the air from the halfway line, going over the keeper’s head and into the top right corner of the goal. The team celebrated with a huge cheer and the relief of taking the lead allowed the team to relax and work hard to create another chance. This eventually paid off as another goal came in the dying moments. The final score was 2-0 to St Julian’s Primary School.

After a brief break and pep talk from Mr Jones and Mr Mansfield, it was time for the final between St Julian’s Primary and Malpas Church Primary to get underway. Both teams had played so well throughout the day that the final was set to be a thriller.

From the first whistle, both teams attacked, creating numerous opportunities. As the ball skimmed past both the opposition’s posts and their own, Mr Jones and Mr Mansfield watched on nervously. This truly was a nail biting match.

After 10 minutes, both teams hadn’t managed to score resulting in an additional 5 minutes being played…sudden death! With only 5 minutes to score, the intensity of the game increased and it was clear both teams were desperate to win.

With still no goals after the additional 5 minutes and with Mr Jones having to pick Mr Mansfield up off the floor, the match was going to have to be decided with penalties.

3 players from each team were selected and took their positions. Both teams huddled nervously together and encouraged their fellow teammates. Having won the toss to determine who would go first, St Julian’s decided to go second. Malpas Church Primary stepped up and scored their first penalty. This was followed by Sergeant who calmly slotted the ball into the top corner making it 1 a piece. Malpas Church quickly regained the lead, scoring their second penalty, putting the pressure back on St Julian’s. A nervous Harley stepped up and thankfully scored the second penalty bringing it back level. With only one more penalty to be taken for both teams, the third and final player stepped forward for Malpas Church. With the ball travelling towards the bottom left hand corner, Harper, the goal keeper, quickly reacted and dived to the corner. To his relief the ball hit the post and deflected off away from the goal. St Julian’s knew that all they had to do was score their next penalty and they would be crowned this year’s winners. Josh, who had played so well throughout the tournament stepped up to take their final penalty. Sending the goalie the wrong way, the ball hit the back of the net and the team fell into a frenzy of celebration! Elated, the team punched the air with joy before shaking the hands of the Malpas Church players who had played so well.

We’re so proud of the team’s performance and behaviour throughout the day and they should all be extremely proud of how they represented the school. As a result of winning the tournament, the team has been invited to play in another tournament on Monday 22nd November against other schools from around Newport. Da iawn pawb!