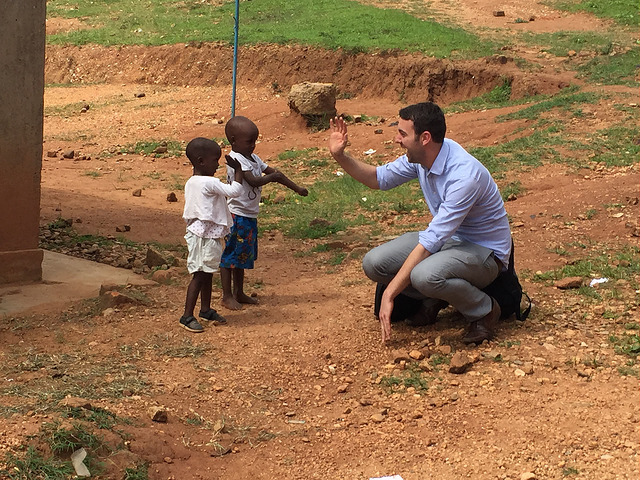 Mr Prewett here again! You’ll be pleased to know that Mr Mansfield didn’t get eaten alive by bugs last night, although I did find a cockroach in my shower…

Mr Mansfield managed to wake up at 7:30am to meet a local man, called Robert, with whom he has a mutual friend back in Wales. Their mutual friend is a man named Ian, who is an engineer in the UK and has set up his own charity (EFOD), which is doing amazing things in Uganda. They have built harvesting store houses, medical centres, maternity units, solar powered water pumps… and lots of other things, too! Mr Mansfield said it was great to chat with Robert and to hear how all these projects were improving lives in Uganda. Robert enjoyed our company so much, that he invited us to his local church for a special Sunday Service, tomorrow!

Following a quick breakfast of bread, jam and boiled eggs (not all together!) we got ready to go to a school called Bukonde Secondary School, which some of the other teachers have been linked with, since 2009. Before we could even set out of the door, Mr Mansfield had lost his hut key! He was certain that he had left it on the table in his room but it was nowhere to be seen. After about half an hour of turning his room upside down and panicking, he eventually realised that he had put it back in his suitcase!

Before heading to the school, we travelled to the local town, Mbale. We stopped off to collect a teacher called Jane, who works at Bukonde Secondary School. Many things here seem to run to ‘African Time’, which basically means ‘late’! Whilst we waited for Jane to arrive, Mr Mansfield decided to go on a little adventure to buy an internet ‘dongle’ so we could upload our blogs from the guest house we are in. After Mr Mansfield had been missing for around half an hour, I decided to go looking for him. Having tried a number of shops, I eventually found him in a local telephone shop. I had little to worry about as by the time I found him, Mr Mansfield had made friends with half the population of Mbale! I was glad to be introduced to them all and we were pleased to (eventually!) walk away with the internet dongle! On the way back to the minibus, Mr Mansfield also decided it would be a good idea to make himself known to the local police and dragged me over to have a ‘selfie’ with him and the officer.

Jane, the teacher from Bukonde, soon arrived to meet us and enjoyed introducing us to all of her local friends, before we headed over to Bukonde Secondary School. As we arrived, we had the warmest welcome you could possibly imagine. All of the teachers, Governors and PTA were at the school ready to meet us. It was amazing to see so many people on the school site, even though it was a Saturday!  We got to meet some truly amazing people. It was fantastic to play with the school cook’s grandchildren, who seemed to really enjoy meeting some ‘Muzungu’. They were the most brilliant children who had HUGE smiles on their faces! They were particularly intrigued by grabbing the hairs on our arms as this was not something they are used to.

Our warm welcome continued as we had a tour around the school grounds. They had done so much in partnership with Treorchy Comprehensive School and it was really inspiring to see what they had achieved together over the last 6 years. The business teacher loved telling me about all the trees he had planted. They will eventually produce crops, which the school will be able to sell to fund their resources and text books. We also had the privilege of being taken to a separate site, owned by the school, which they use to grow additional crops, including some called ‘Cassava’, which the staff at the school were determined to make us try (raw!). It was an ‘unusual’ food which had the texture of a coconut, but a taste unlike any I have ever had before! Mr Mansfield and I enjoyed trying it, before passing it on to our fellow teachers to finish off! It was really great to see all that the staff at the school were doing, to ensure the land was helping them to make their school a better place.

At the main building of the school, we were then asked to attend a meeting. This was a very formal affair and the chair, Isaac, was keen to stick to his agenda! The meeting started with the singing of the Ugandan national anthem and more kind words from the teachers at the school. Members of the teaching staff, PTA and Governing Body all made speeches, thanking Treorchy Comprehensive School for their had work over the years. We were then slightly surprised to each be asked to make a speech, ourselves! Luckily enough, we each managed to throw together a few words ‘off-the-cuff’, which they appreciated and we each got a round of applause after we had finished speaking. They were really kind people as I’m not sure our speeches were as good as theirs, but they clapped anyway.

Once the formalities had ended, they treated us to a lunch of doughnuts and samosas (washed down with some ‘pop’!). When our lunch had settled, we were offered the honour of each planting a new tree in their school grounds. We were taken aback by this offer and really appreciated the staff at the school arranging this for us. Hopefully, at some point, we will be able to get quick enough internet to upload the photos and videos of us doing this. After the tree planting, we were sad to hear that we had to leave the school to continue on our journey. It really was an amazing place and were overwhelmed by how kind and welcoming everyone was.

The next part of our journey for the day took us up to a viewing point on top of a mountain. Luckily, we didn’t have to climb it ourselves as we went up in our minibus, although with our long legs, Mr Mansfield and I were both crammed in like sardines. We were glad to get to the top after an hour and a half on steep, bumpy roads. The views along the way were breathtaking and the people were so friendly, all welcoming us by shouting ‘Jambo, Jambo’, (Hello, Hello) and running alongside the minibus, waving.

We soon forgot about the cramped, bumpy journey to the top, when we saw the stunning views! Joseph, our tour guide up the mountain, told us lots of information about the history of Uganda and its neighbouring countries.

Before we went back down, Mr Mansfield and I took the opportunity to meet some of the children, who lived in a mud hut on the top of the mountain. Out of the minibus, we got one of the footballs (donated by Tesco), and had a little kick-around with the children. As soon as they saw us bring the football out, they flocked around, desperate to play! They absolutely loved playing and (more than once!) showed us up with their footballing skills! They were so good that, in the end, having run circles around us for a while, we conceded defeat. We gave the ball to the children, who were so grateful! Their faces looked delightful and they thanked us endlessly.

Following the journey down the mountain, we travelled back to Mbale, where we had started the day. We arrived at a Hotel (Mount Elgon Hotel) to meet Apollo and found that there was an event going on to promote a coffee company. We were enjoying the free coffee and biscuits when all of a sudden, a band and some dancers appeared on stage. Mr Mansfield suggested it would be good to seize the opportunity and take part in the traditional African dance that was going on. I felt a little reluctant to join in as it seemed to involve a lot of bottom-shaking and screeching, but Mr Mansfield was particularly keen and before I knew it, he had dragged me onto the stage to dance alongside him and the other dancers. Joseph and the onlooking crowds cheered and fell about laughing, encouraging us to keep dancing, whilst (unfortunately!) some of our fellow teachers were capturing it all on video!

Our evening eventually ended and we returned to our guest house for dinner. Again, we were treated to some lovely food, including spaghetti and local ‘chapatis’. We stayed up for a while, discussing what an incredible (and busy!) day we had experienced before we decided to begin writing the day’s blog. Two hours (and several phone calls to the UK!) later, we managed to get the internet working (albeit ridiculously slowly) and began to upload our blog for the day. Feeling triumphant, I decided to go back to my room to get some more bug spray, as we had some interesting ‘critters’ flying around us. As I walked back to my room, I realised that my key was locked in the guest house reception office, having handed it in earlier this morning. Mr Mansfield appeared delighted by this news and danced around joyfully laughing at me as I pondered what to do. I was devastated to realise that there was no way I was going to be able to get the key back before bed time and had to give up all hope. I returned to finish this blog, knowing that my only option was a night on the floor of Mr Mansfield’s (leaky!) room! With a bat now circling above my head, I can’t put it off any longer and had better start to head over to his hut.