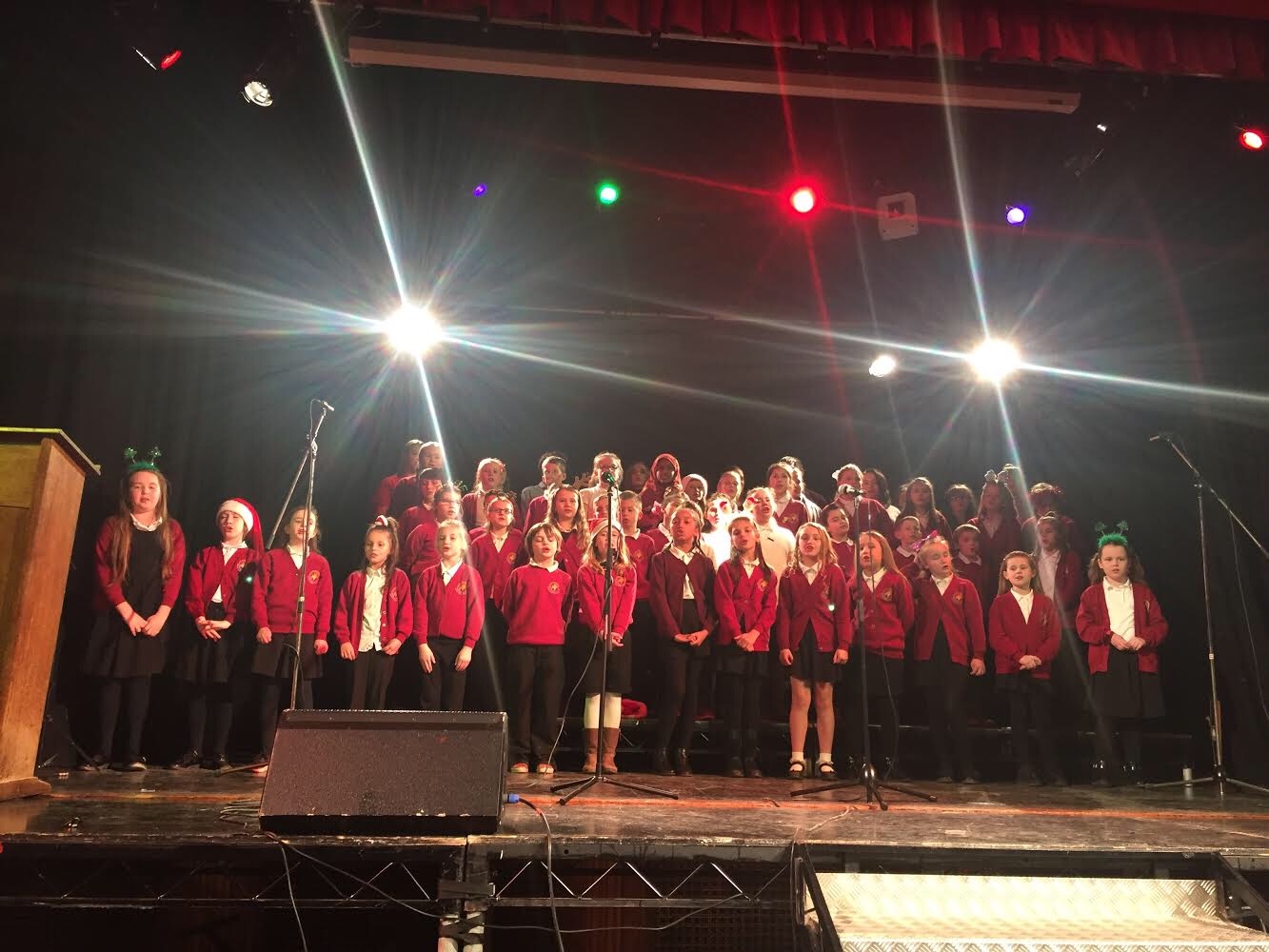 The concert kicked off at 7pm with Holly, a St. Julian’s High School, opening the show with a pitch-perfect performance of ‘O Holy Night’. Many other excellent performances followed, including the outstanding Acapella vocal group, a tap dancer, Mr Baxter’s Rock Band and a number of soloists. A highlight of the evening was when a past-pupil of ours, Leo, arrived on stage dressed in an elf costume. He then pulled a pair of drum sticks out of his pocket and started tapping away on an upside down water container. He was then joined by another pupil and Mr Budd, a teacher from the music department, who were also dressed as elves. Together they performed an incredibly energetic rhythmic routine as the crowd clapped along with delight.

Another past-pupil of ours, Mackenzie, showed off her incredible acting skills starring in a comedy sketch about Health and Safety at Christmas time.

Both the Glan Usk Primary School choir and St. Julian’s Primary School Choir performed and sounded absolutely outstanding. Our choir sang ‘When Christmas Comes to Town’ from the Polar Express movie, ‘Perfect’ by Ed Sheeran, ‘Rocking around the Christmas Tree’ and ended with the popular Christmas hit ‘All I want for Christmas is You’, with the opening solo from Harrison. We were so grateful that Mr Budd,

Some of our woodwind players also performed Jingle Bells conducted by Lucy Brunnock, the superb woodwind teacher from Gwent Music.

The concert ended with pupils from all three schools joining together to sing the ‘Camel Boogie Woogie’, complete with actions!

All of our pupils were absolutely buzzing when they come off stage and parents had huge smiles of pride on their faces as they left. It was a long night, but a wonderful night to celebrate all of the amazing talent of pupils in the St. Julian’s Cluster.

We’re so grateful to all the pupils who took part, the parents who came to support us and also to Mr Edwards, the Head of Music at St. Julian’s High School, for organising such a fantastic event. We’re looking forward to the next one.

You can watch the video of our performances here… (our camera was positioned by the piano, so it sounds a bit too loud over the singing – sorry!)

You can see the three elves drumming here…