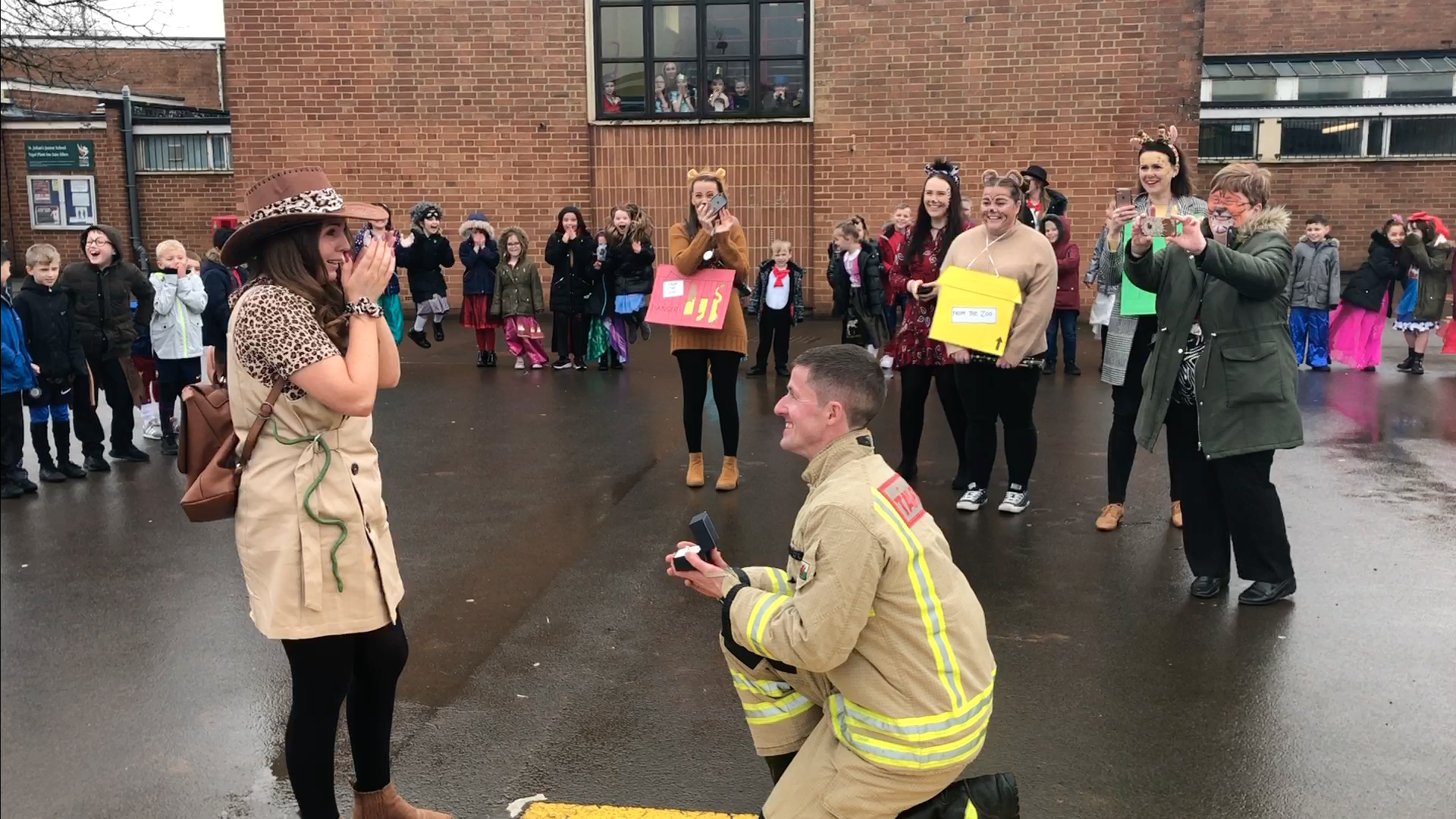 It has been an absolutely wonderful World Book Day! The costumes worn by staff and pupils were superb! However, something extra special happened on this book day!

On the weekend, we were contacted by a fireman named Gavin. He asked for our help in doing something extra special… he wanted to propose to his partner, Miss Butcher! We agreed to help and operation ‘Marry the Butcher’ was put into action.

As well as being World Book Day, the 5th March is also Miss Butcher’s birthday and Gavin was particularly keen to propose on her birthday (to avoid having to buy her birthday present as well as a ring we suspect!).

Just past 11am this morning, Mr Mansfield summoned Miss Butcher to a meeting in the headteacher’s office with himself and Mrs Hill. Miss Butcher looked very worried that she had been called to such a meeting in the middle of her maths lesson! The minute she was in the office, Miss Jones and Miss Rounds gave the signal and the three reception classes scurried up to the junior front playground really quietly! In addition, two year three classes, which Miss Butcher had previously taught, took up position on the junior playground.

Miss Jones then communicated with Gavin, who was down the road waiting with his colleagues in a fire engine! Miss Jones then radioed Mr Mansfield to ask for his assistance with an incident on the Junior playground. Mr Mansfield took Miss Butcher up to the junior yard to “help with the incident” and the Year 3 children burst into a chorus of ‘Calon Lan’, one of Miss Butcher’s favourite songs.

The reception children formed a pathway and Gavin walked through it, getting down on one knee in front of Miss Butcher, who was dressed in her rather fetching zookeeper costume at the other end! Miss Butcher was very emotional and thankfully said “yes” (otherwise that would have been quite awkward in front of all the children!!)

Confetti cannons popped and the children cheered. It was really lovely to celebrate that as well as World Book Day! One child in year 3 turned to his friend next to him and said “I’m not really sure what’s going on, does Miss Butcher know that man?!”

A huge congratulations to Gavin and Miss Butcher from us all at SJPS!