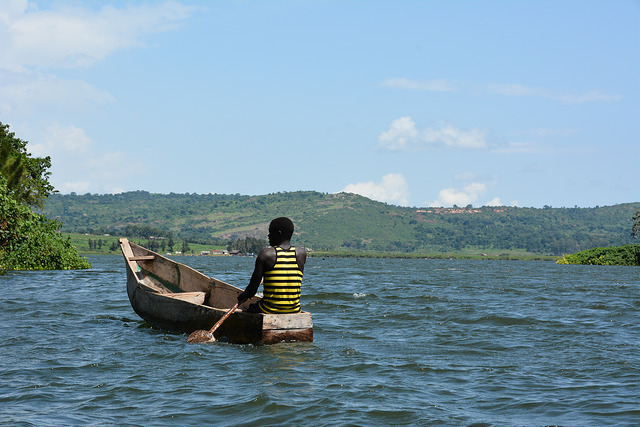 To Jinja and Beyond

What a day! We woke up at 8am, had a shower and got dressed. My shower was cold, but Mr Prewett was lucky enough to have hot water in his room. There was a power cut first thing in the morning, so we had a shower in the dark and it also meant that we couldn’t charge our phones. For breakfast, we had a selection of fruits, omelettes, bread and mango juice to drink.

We then piled back into the minibus and set off on the 6-hour journey, towards Mbale. Both Mr Prewett and I couldn’t stop staring out of the window, the whole journey; it was fascinating to watch people going about their daily lives. Along the side of the muddy, dusty roads, in most of the little towns that we passed through, there were market stalls and huts, with people selling furniture, food, meat, clothes, car parts and all kinds of things. Street sellers would run up to the vehicle every chance they could, to try to sell us various merchandise, ranging from hats and balloons, to rat-traps and cakes. We also saw ladies walking up and down the streets carrying huge baskets on their heads, full of everything you could possibly imagine!

The roads are absolutely crazy; we’re so glad that we’re not driving. At the start of the journey, particularly in Kampala (the capital city) vans, cars and ‘Boda Boda’ bikes shot around us in all directions. Horns were constantly beeping and at one point, Apollo turned around to us, smiled and said “It’s chaos!” … he summed it up pretty well. James, our driver, did an amazing job, though!

Lots of the Ugandan people seem just as fascinated looking at us, as we are with them. Many call out the word ‘Muzungu’ as we pass, which is a friendly term for ‘white person’.

After around 3 hours of driving, we ended up at Jinja, which is the source of the River Nile. The first thing we did was hijack a star-pupil assembly back at school. It was SOOOO good to hear everyone’s voices and tell them what we’d been up to. I think we could even hear Mr Carter sobbing in the background because he misses us so much!

At Jinja, Apollo had arranged for us to have a meal which he had pre-ordered at the start of the journey. Most of the team had fish and chips but Mr Prewett and I went for chicken and chips. It tasted…different…! The chips were nice, though.

After the meal, we managed to connect to the Wifi and were able to video-call Mrs Orford. Even after just one day apart, I could tell she was missing me greatly and fought back the tears! She took us into my class first and it was so amazing to see everyone! After weeks of learning about Uganda with the class, it was really surreal to now be talking to them from here. Mrs Orford then took us down to see Mr Prewett’s class, who were, once again, so excited to see us. It was so good to see the big, huge grins on their faces as they stared at the tiny picture of us on Mrs Orford’s phone. We then had a brief chat with Mr Rees, who I think was just relieved that we had made it here safely!

It was so amazing to just sit on the decking area, overlooking the River Nile and taking in the picturesque scenery. After seeing everyone working so hard back at school, we felt really guilty! Especially as the next thing Apollo had planned for us was a boat trip around Lake Victoria! The views were breathtaking and our guide, Moses, taught us about the species of birds and showed us the exact point where the River Nile begins. Did you know… it takes three months for the water to travel up the entire length of the River Nile?!

Once we were back on the Minibus, the dark clouds closed in and the rain started to hammer down, with thunder crashing louder than I have ever heard. It only lasted half an hour, though, and before we knew it, the sun was back out and the sky was blue again. The trip was all too much for some people, who needed some extra beauty sleep…

Then, we arrived at our guest house, where we’ll be staying for the next six nights. We said “goodbye” to James, our driver, and also to Apollo, though we will be seeing him again tomorrow.

One of the ladies, who works here, showed the girls to their huts, first, and then showed Mr Prewett and I to ours. The first room she offered us was a bright, airy room with a lovely shelving unit, shirt hangers and a large four-poster bed. The second room she showed us was a much darker room, with little sunlight shining through the window, a crusty concrete floor and plaster crumbling off the walls. Upon opening the door to this room, the lady smirked and said “This room also has water which runs down the walls and onto the walls and onto the floor, so do not leave anything lying on the floor and be careful with the electrics.” With that, she left us with the keys and said we could choose who had each room. I was all ready to play ‘Rock, Paper, Scissors’ with Mr Prewett, but before I could count to three, he had grabbed the key to the nicer room and began unpacking his suitcases… leaving me to take the other room! As I sit in bed now, I can also feel a number of bed-bugs crawling over my legs…delightful!

At around 7pm this evening, we had supper, which was delicious; it was rice and some sort of meat stew. The cook even let me have seconds! Then we played a game called ‘Dobble’ and listened to Mr Prewett tell stories of when he was a mischievous school-boy.

Early start tomorrow as a gentleman, who is a friend of one of my friends back home, is coming over to meet us. Hopefully, I won’t get too wet, or bitten during the night…