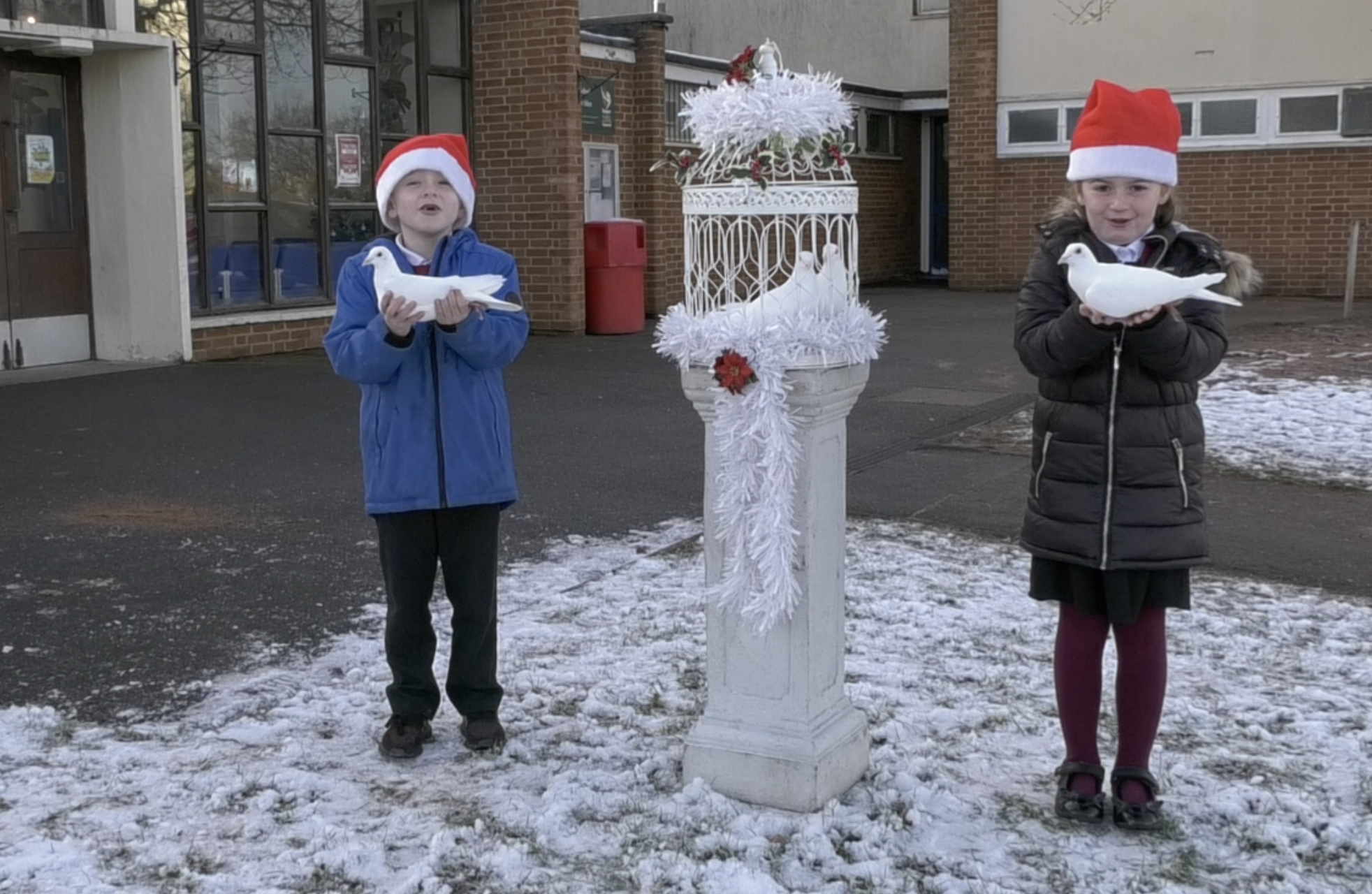 Each year at St. Julian’s Primary, we film a Christmas video for our Carol Service and this year was no exception! ‘The Nativity Rap’, ‘The Bear and the Hare’, ‘Monty the Penguin’, ‘Hallelujah’ and ‘All I want for Christmas’ are among our videos from the past but this year, we went with the good old classic ‘Twelve Days of Christmas’!

The four and a half minute video was filmed over the past week and features nearly all of our 650 pupils in the school! Each year around the beginning of December, pupils, teachers and even parents start to offer ideas about what we could do for our Christmas video. This year, I was a bit worried that time was getting on and we hadn’t made a decision about what we were going to film. The other day, I heard our choir singing the Twelve Day of Christmas whilst rehearsing for a Christmas Concert and I turned to another member of staff and said “Wouldn’t it be great if we could get all the animals from the Twelve days of Christmas for our video?” The following day, she had made a few phone calls and we were ready to get started!

The first scene we filmed was the ‘Two Turtle Doves’ Scene. We are so grateful to Cheryl and Louise from ‘All Doved Up‘, a company which specialises in White Dove Releases for weddings, funerals and memorials. They brought four doves to school and two of our pupils were allowed to release them whilst singing ‘Two Turtle Doves’. On the first take, the two pupils jumped a bit when the doves flew off. We went to have a second take with the other two birds and we accidentally let one go before pressing record on the camera. It sat on our roof for a bit and then flew home. We decided to let Mrs Arnold release the last dove and we stuck with our first take. The doves were absolutely fascinating to watch, they flew up, circled in the sky for a moment and then flew home. Apparently, they arrived home before Louise, their owner!

The next scenes we filmed were ‘Eight Maids Milking’, ‘Three French Hens’, ‘Six Geese Laying’ and ‘Four Calling Birds’. On Friday, we took fourteen pupils over to Cefn Mably farm. We were met by Anthony and his wife, who allowed us to use their animals in our video. We started with the cows and dressed eight pupils up as maids. They stood in front of the cow shed and we tempted the cows over to the gate with food. It was quite difficult to get close enough to the cows, so we ended up putting a green-screened cow in the final cut also! Next up was the hens. Four pupils sat on a bench and got to hold two hens on their lap. The children were so excited and one of them even got a peck on the nose from one of the chickens! There were only two chickens tame enough for our children to hold, so we green-screened the third hen in for the video. Then we wandered over the geese pen and again, tempted the geese over with food, quickly filming whilst they were in shot. We had just enough time to have a quick play in the amazing park before we left! Thank you so much to Cefn Mably farm for allowing us to come to film and being so helpful whilst we were there!

Yesterday, we filmed the ‘Five Gold Rings’ using a drone. We asked pupils to bring in tinsel to wear on their head to make the rings gold, but unfortunately, it was too difficult to see the Gold from so high in the sky, so we changed the words to ‘Five St Julian’s Rings’ instead of ‘Five Gold Rings’. We also filmed ‘Lords Leaping’ and asked ten little lords from our Foundation phase to leap on the spot whilst wearing crowns.

Today, we filmed all the other scenes. We went around the classes filming the pupils and their teachers singing ‘On the ** day of Christmas, my true love gave to me’. When that was done, we still had ‘Seven Swans Swimming’, ‘Eleven Pipers Piping’, ’12 Drummers Drumming’ and of course the ‘Partridge in a Pear Tree’. We green-screened a pupil swimming with some swans, filmed our recorder club, wind and brass players tooting for the Pipers Piping and then were delighted when the wonderful Upbeat Music and Arts kindly drove to visit us with twelve drums for the drummers to drum. We’re so grateful to Dave and his team who were willing to come over and be a part of the video!

We couldn’t find a real Partridge but we found a stuffed one… which has sat in my office for the past week and made me jump each morning when I’ve come in and turned the lights on!

I’m so grateful to all our wonderful pupils who feature in the video, our amazing teachers and teaching assistants. Things like this come together as a result of our excellent team-work and are testament to the dedication of every member of our St. Julian’s family. I’m also so grateful to All Doved Up, Cefn Mably Farm and Upbeat Music and Arts who have kindly provided their services free of charge to us for this video.

All that’s left for me to say is… Sit back, relax and enjoy… The Twelve Days of Christmas!