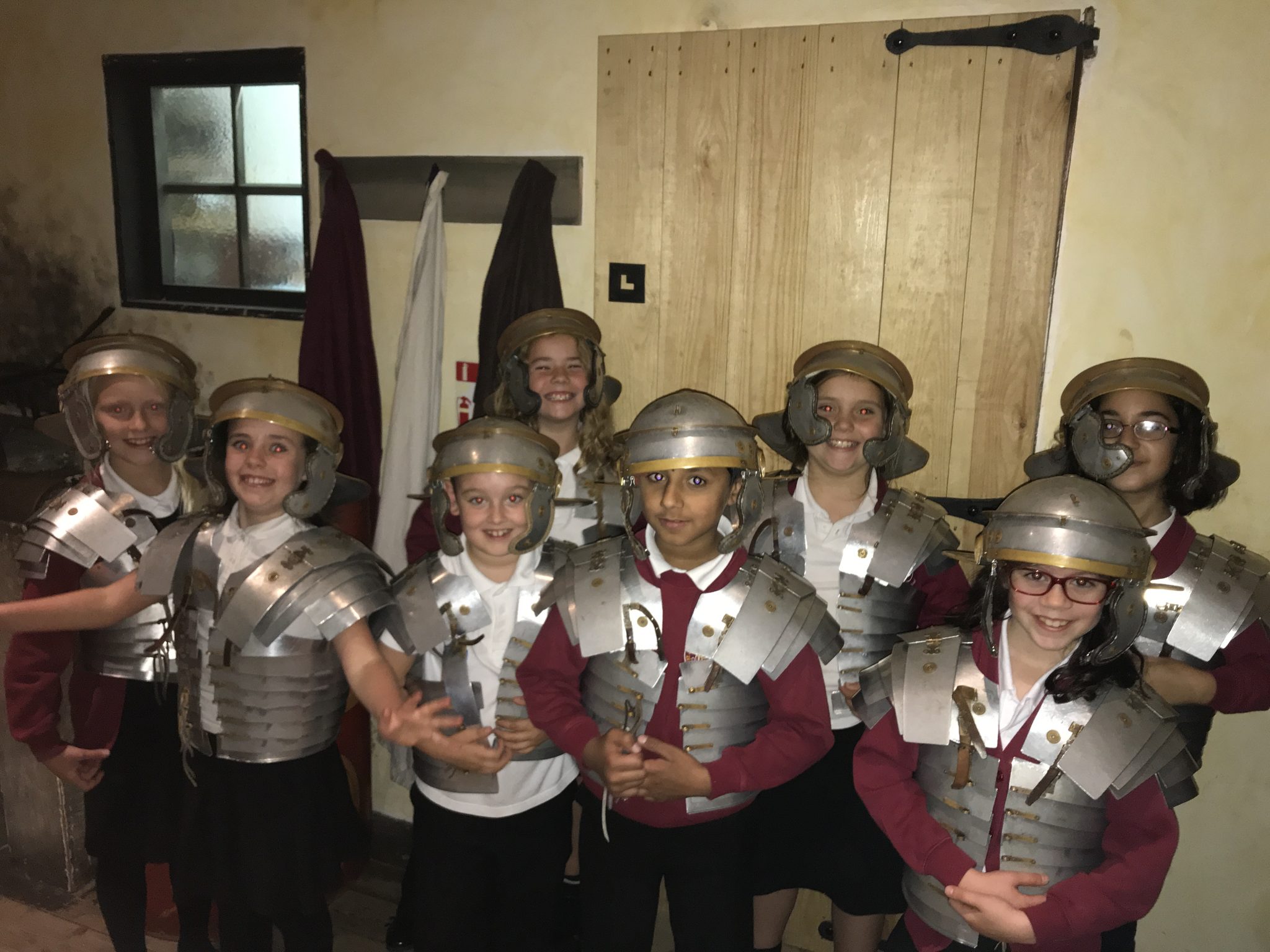 Roman soldiers were stationed at Roman Caerleon for almost 200 years from A.D.75, when they defeated the local Ancient British tribe, the Silures. Y3/4 children were really excited about exploring this fascinating site.

They thoroughly enjoyed marching around the amphitheatre, chanting, ‘sin, dex’ (left, right) just like the soldiers did as part of their military training. Discovering that gladiators had to fight wolves, bears and even lions in this arena, was definitely an eye opener!

At the barracks, they couldn’t believe that eight men had to sleep in one very cramped room – just imagine the smell after a day of training! Later they got to try out the soldiers’ bunk beds – in the museum’s reconstructed barrack room. They thought the straw mattresses and wool blankets made an itchy combination. The children were even less impressed to discover that the soldiers used a sponge on a stick with vinegar when they visited the latrines! Dressing up as a legionary, made them realise how heavy the armour was, but excited about trying out their homemade scutums (shields)!

The Gallery gave them a chance to investigate real Roman artefacts, such as a rich Roman’s coffin (complete with skull and bones), mosaics and the legion’s weapons.

At the Fortress Baths, children examined the gems, dice and money that had been found in the drains and learnt that Romans didn’t wash with soap and water, but preferred to use olive oil and a strigil to scrape dirt away! Pickpocketing was rife at the baths so bathers could hire a slave to keep an eye on their clothes, whilst they whiled away the hours, gossiping, gambling and feasting on dormouse kebabs – yum!

The workshop – ‘Masters and Slaves’ was a big hit! ‘Masters’ enjoyed stuffing themselves with the latest delicacies, such as peacock brains and snails. Feeling full didn’t stop the Romans gorging themselves, as a slave could be summoned to tickle their throats with a feather to induce vomiting – charming! Then they could just carry on with their guzzling! Our ‘Slaves’ were not impressed as they passed the bucket round!

The trip really engaged the children and brought our Roman theme to life. They now have a deeper understanding of how the Romans lived and this will continue to inform their work over the coming weeks.