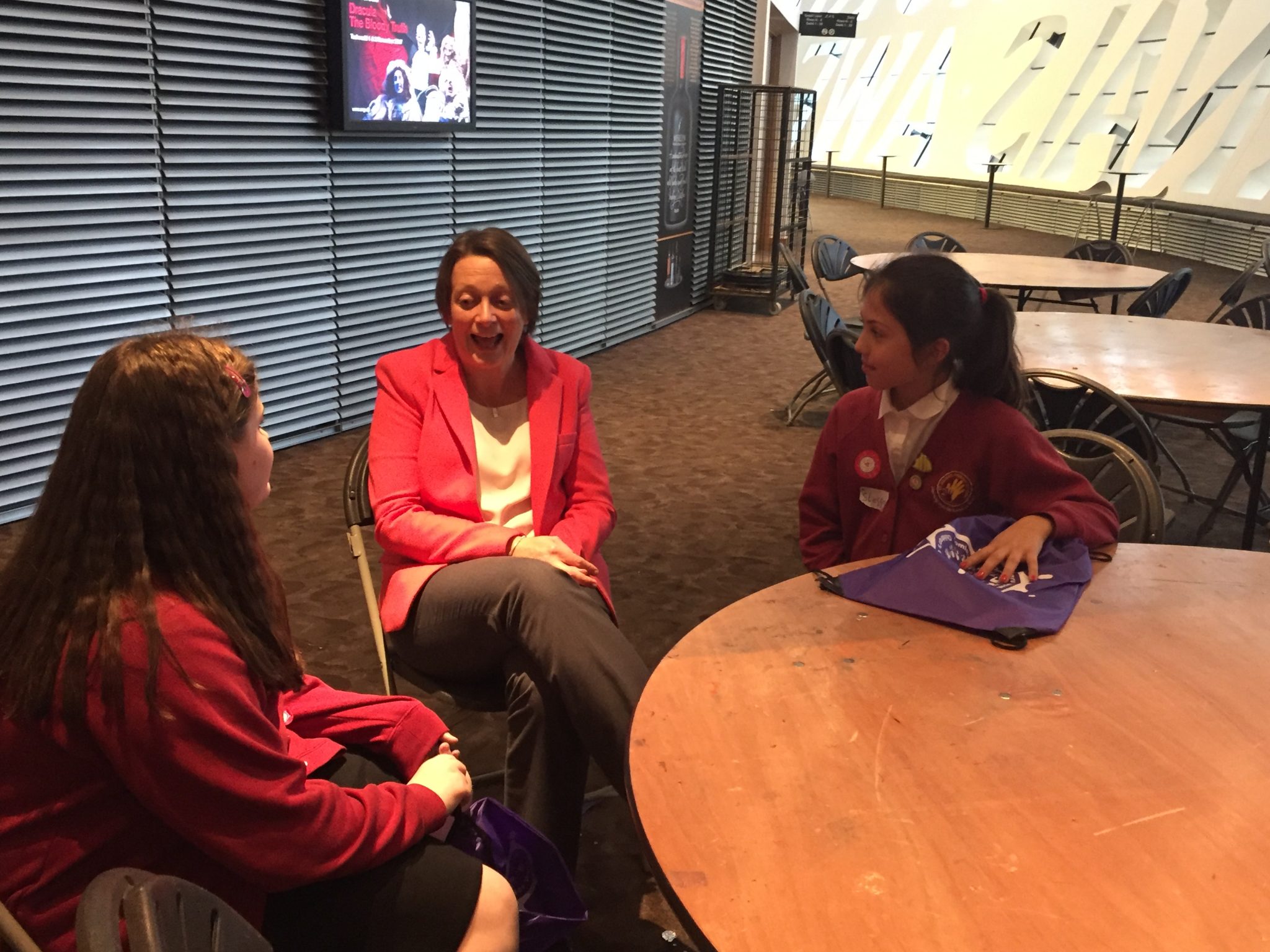 Two pupils were elected, by VOICE club members, to become the new ‘Super Ambassadors’ for 2017-18. ‘Super Ambassadors’ work in St. Julian’s Primary School to promote the role of the Children’s Commissioner for Wales. The school took part in this project last year and we were very excited to sign up again.  As soon as Mrs Orford registered the school, we were sent a large envelope full of posters, pencils, stickers and badges for the ‘Super Ambassadors’ to keep.  Also in the envelope, was an invite to training taking place in the Wales Millennium Centre.

The two ‘Super Ambassadors’ couldn’t wait to attend the training and counted down the days.  The car journey to Cardiff Bay was full questions the girls wanted to ask Sally Holland (Children’s Commissioner for Wales). They weren’t sure what to expect from the training but couldn’t wait to start.

When we arrived, Sally Holland was stood in the entrance greeting all of the schools.  We asked if we could have our picture taken with Sally, but felt it wasn’t the right time to ask any questions, as more and more schools were arriving.

As soon as everyone had registered we were taken to a large room.  Sally Holland spoke and asked if we could call out some of the ‘Rights of a Child’.  Our two ‘Super Ambassadors’ put their hands up straight away and started to call them out.  Mrs Orford was very proud of them as they weren’t scared to get involved straight away.  The children then went off in their groups and were told they would be attending three workshops.  The teachers were all asked to stay and they would be involved in a separate workshop.

When it was time to leave, the girls were given a free Super Ambassador bag to keep all of their resources together. Sally Holland was saying goodbye to everyone and this was the  opportunity we had been waiting for! The girls asked Sally if it was possible to ask her some questions and she was more than happy.  They sat with Sally for 5 minutes asking her how she became the ‘Children’s Commissioner for Wales’, what is her favourite part of the job and which ‘Right’ is most important to her (Sally replied all of them are equally important).  The ‘Super Ambassadors’ learnt so much in those 5 minutes and I definitely think we could be looking at the next ‘Children’s Commissioner for Wales’ in one of these girls.

The girls didn’t stop taking on the journey home! They loved the training and were so pleased that they had been invited to attend. It was a fantastic opportunity for the ‘Super Ambassadors’ to network with children from other schools. We can’t wait to share it with the rest of the school over the next few weeks.